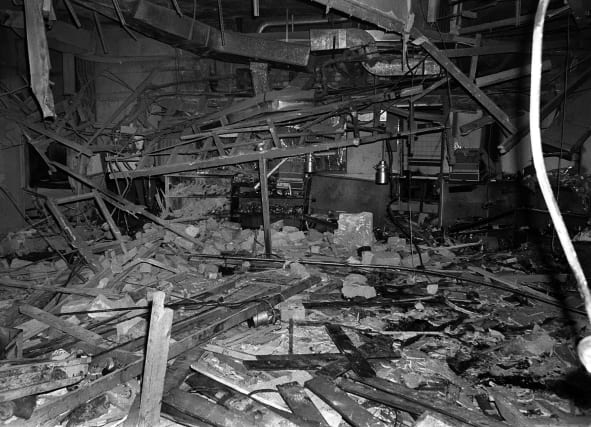 Here is a timeline of events related to the Birmingham pub bombings in 1974:

– November 14 1974: Bomber James McDade, 28, a lieutenant in the Birmingham IRA, is blown up planting explosives at the Coventry telephone exchange.

– 8.11pm: Ian Cropper, a telephonist at the Birmingham Post and Mail, receives a call. A male Irish voice tells him: “There is a bomb planted in the Rotunda and there is a bomb in New Street… in the tax office. The code word is Double X”. The line goes dead and Mr Cropper calls the warning in to police.

– 8.14pm: The central police control room notifies officers on the ground in Birmingham city centre to head to the Rotunda and New Street.

– 8.14pm-8.18pm: Six officers arrive at the Rotunda. Some of their number then go inside the office block to begin searching the building, while two others run towards nearby New Street.

– 8.18pm: The first bomb, weighing between 25lb-30lb (11kg-14kg) goes off in the Mulberry Bush. It has been left next to a telephone by the bar. Leaving a metre-wide crater, it kills 10, including friends Paul Davies, 17, and youngest victim 16-year-old Neil “Tommy” Marsh, who happen to be outside the pub at the time.

– 8.20pm: A second bomb weighing 30lb (14kg) detonates in the Tavern in the Town, blasting a hole in the 10in concrete floor and a nearby basement wall. It is placed in an alcove, near a one-armed bandit games machine. One witness, stood near the bomb, describes hearing a “whirring sound” right before detonation.

– 8.23pm: A 999 call is passed to officers in the city centre sub-division at Digbeth police station, from a resident at nearby Stephenson Tower, reporting a “bomb” has gone off at the Mulberry Bush.

– 8.27pm: A 999 call is passed to sub-division officers, from the manager at the Hasty Tasty pancake house two doors down from the Tavern, describing that the “building filled with smoke”. It is classified as a fire.

– 8.33pm: Seventeen minutes after the first bomb, a police station radio operator reports back to the 999 call handlers that “resources sent… with times of involvement”. The pub bombings inquests are told none of these records, including the times messages were passed on, have been recovered. Force control memory tapes were wiped.

– 10.40pm: Five men are arrested after getting off a train travelling from Birmingham New Street railway station and detained at Heysham Harbour, Lancashire. Billy Power, Paddy Hill, Gerry Hunter, Richard McIlkenny and Johnny Walker, who will become five of the Birmingham Six, are taken to Morecambe police station for questioning.

– November 22 1974: Under questioning by West Midlands Police serious crime squad officers at Morecambe station, some of the men claim they are made to sign confessions. They undergo forensic tests by scientist Frank Skuse.

– 5am: A third unexploded IRA bomb is discovered behind Barclay’s Bank, Hagley Road, Birmingham, and destroyed in a controlled detonation. The remnants of the bomb are later lost by West Midlands Police.

– November 22 1974: Hugh Callaghan, the last of what will become known as the Birmingham Six, is arrested in Birmingham.

– November 27 1974: Part-time barman Tom Chaytor, 28, a divorced father of two who took on a bar job at the Tavern in the Town three weeks before the bombing, dies of injuries sustained in the blast. He becomes the 20th victim of the blasts.

– November 28 1974: A coroner opens and adjourns inquests into the deaths. The hearings never take place, as they are overtaken by the criminal trial and subsequent convictions of the Birmingham Six.

– December 9 1974: James “Jimmy” Craig, 34, a fit amateur footballer and automotive factory worker, out on a date on the night of the bombings, becomes the 21st and final victim after succumbing to his injuries in hospital.

– March 27 1991: The Birmingham Six are released following a ruling by the Court of Appeal. Their convictions go down as one of the gravest miscarriages of justice in legal history.

– June 1 2016: Senior coroner for Birmingham and Solihull Louise Hunt rules that the original inquests should resume. Delivering her ruling, she said: “I am of the view that the evidence does now need to be heard publicly, so that a decision can be made based on evidence as to how these 21 people came by their deaths.”

– April 5 2019: More than 44 years after the bombings, the inquests into the deaths of the bereaved loved ones conclude the victims were unlawfully killed.