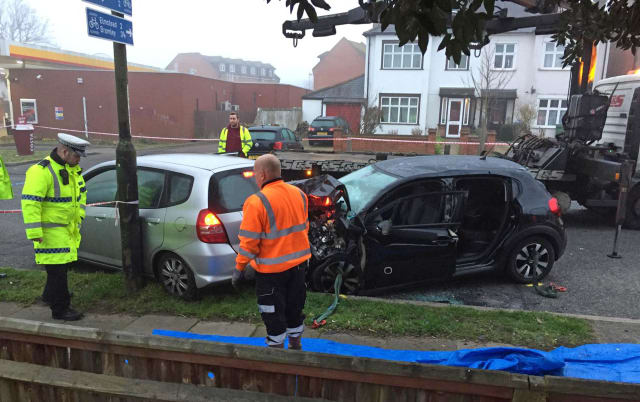 A white van man has been jailed for nine years for killing an elderly couple after a drink and drug birthday binge.

Ben Ord, who had just turned 41, was driving at around 70mph in a 30mph area while being pursued by police.

He veered onto the wrong side of the road, crashing into a Citroen C5 containing Robert Wigzell and his wife Shirley, both 71.

The couple, who had been returning home from babysitting their great grandchildren, were trapped in the wreckage and died at the scene.

Afterwards, Ord admitted he had more than 10 alcoholic drinks and a gram of cocaine, the Old Bailey heard.

Prosecutor Jonathan Polnay told how Ord came to the attention of police when he pulled over very close to a squad car at traffic lights for not apparent reason just after midnight on February 23.

Officers followed his rented Ford van, intending to speak to him, and as the defendant continued driving slowly, they activated their blue lights and siren.

Ord then sped away and was travelling on the wrong side of the carriageway at the time of the crash, the court heard.

When he was detained by police, Ord said: “I’m sorry. I’m sorry.”

An empty bottle of Budweiser was found in his car.

He told paramedics he had drunk “a lot”, more than 10 drinks, and had “about a gram” of cocaine.

When the defendant was searched, police found a wrap of white powder in his jeans.

Tests revealed Ord was nearly three times the legal drink-drive limit and had drugs in his system.

Ord had a previous conviction for possessing ecstasy with intent to supply in 2001 and received six penalty points and a £576 fine for driving at 94mph on a 60mph dual carriageway in 2017.

Judge Richard Marks QC jailed Ord for nine years and disqualified him from driving for 16 and a half years.

A large number of the Wigzells’ family sat in court at the Old Bailey to hear Ord’s sentence.

In a victim impact statement, their daughter Angela Wigzell said they always worked hard to give their offspring “the best childhood they could”, leaving them with many happy memories.

The Wigzell family said in a statement afterwards: “Our family has been left completely heartbroken and destroyed by the reckless and selfish behaviour of Ben Ord, he chose to drive a motor vehicle after excessive drinking and drug taking, with total disregard for the safety of others.

“Never again will our lives be the same. Mum and Dad were the core of our family.

“No sentence that has been given will ever be enough, as we will be serving a life sentence without them.

“Two of the most loving and kind people in the world have lost their lives for absolutely no reason, when they should be enjoying retirement and watching their grandchildren and great grandchildren grow up, where is the justice in that.

“We hope that anyone who takes drugs or alcohol before driving thinks twice before doing so, because the trail of devastation and heartache which they would leave behind is endless.”

Detective Constable Alan Curtis, of Scotland Yard, said: “Ord had no regard for the safety of others when he set out to evade police and his actions ultimately had tragic consequences.

“This case highlights the dangers of driving under the influence and we hope it will act as a deterrent to anyone intent on doing the same.”