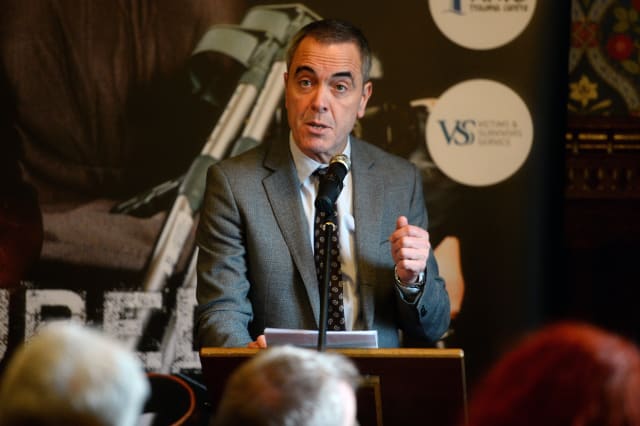 Jimmy Nesbitt has said it is “scandalous” so much money has been “wasted” on Brexit while special pensions for those left severely injured in The Troubles are still not guaranteed.

The actor from Coleraine urged those in power to honour their “moral and social responsibility” in securing a degree of financial security for victims so they can live their lives with “independence and dignity”.

Victims, brought together by the Wave Trauma Centre Support Group, have been campaigning for years for a special pension for the most severely injured.

They have buried four members since their campaign started.

Most of the campaigners are in their late 60s, with some in their 70s and 80s.

There are about 500 people severely injured as a consequence of the Northern Ireland conflict, according to the group.

Speaking at the Palace of Westminster, where the Wave group launched a photography exhibition called Injured That Day, patron Nesbitt told the Press Association: “Do we have a moral and social responsibility to these people?

“They’re not asking for much. It is important that those that can make this happen make it happen.”

Asked about Brexit, Nesbitt said: “It seems shambolic to me.”

He added: “The little amount of money that we’re asking for today, for these people that were injured, and you think of the money that’s been wasted so far on this process and no-one’s any the wiser.

“I honestly think that in itself is scandalous.”

The Cold Feet star also remarked on the power-sharing impasse in Northern Ireland, saying: “I also find a slight irony in the fact that Stormont is lying dormant and yet so many of our politicians are playing a prominent role in what’s happening with Brexit.

Peter Heathwood, who was shot and left paralysed in a shooting at his home in north Belfast in 1979, said the pensions would cost between £3.5 million and £5 million per year, adding the cost would decrease as victims die.

“It’s not a large amount, it’s just quite simple,” Mr Heathwood said, adding it is about “dignity and independence”.

In a speech, Nesbitt said the victims have been through experiences that “almost defy imagination”.

He said: “Every one of them is part of the living legacy of Northern Ireland’s violent past.

“When people say ‘thank God the Troubles are over and we can all get on with our lives’, I can understand that.

“But for those who came through those desperate times relatively unscathed and those for whom they are not even a distant memory, there needs to be a reminder that for many men and women what happened to them is not consigned to the past but is still here, in the here and now.”

“These were not people in the wrong place at the wrong time. They were at work, they were at home with their family, they were having coffee in a cafe, they were walking home after an evening in the cinema.

“They were in the right place when they should have expected to be safe and secure.

“But when you look into their faces, you don’t see people looking for sympathy, let alone pity.

“They are survivors. They have reconstructed their lives. They have moved on but what they will not do is move aside.”

Nesbitt emphasised the victims are only asking for a degree of financial security and not a “huge amount”.

He said: “They want to be able to get their grass cut. They want to know that they can afford to put a slate back on the roof in winter.

“They want to take their grandchildren out for a treat just like any other grandparent.

“They want to live as long as they can in their own home with the people who they love and who love them around them.

“They need those who have the power to make a huge difference to their lives to do what is right. It needs to be made to happen”.

Progress at Stormont on a pension stalled over the inclusion of a small number of perpetrators of violence who suffered injuries among those eligible.

Also at the exhibition event in Westminster was former shadow Northern Ireland secretary Owen Smith, who criticised Secretary of State Karen Bradley’s performance on the issue.

He said: “She moves like a glacier. That’s how slow she is.”

“She says the right things and there is definitely progress behind the scenes but she needs to get on with it.

“She’ll be out of a job the way things are going before she gets a chance to implement the right thing. And she should be pressing quickly.”

Former Northern Ireland secretary Lord Hain, who also attended, said: “I’ve been insisting, with cross-party support of peers in the House of Lords, that they get a pension which is their demand.

“It’s frankly of minimal cost in the overall scale of things and is the least that could be done to provide some justice and compensation after, in many cases, decades.”

Lord Hain said it must be done this year, one way or another, at Stormont or Westminster.