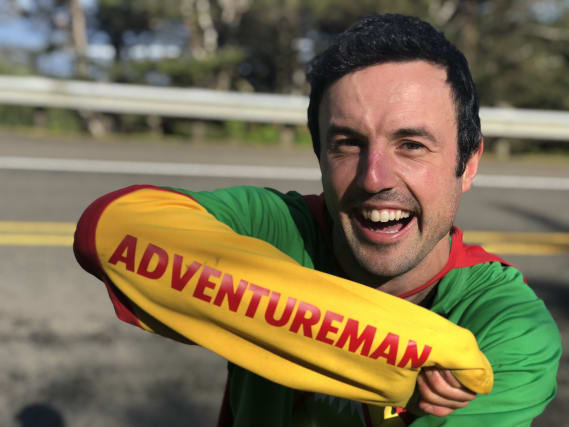 A British adventurer has finished his 5,500-mile, 210-marathon coast-to-coast run across the US – by sprinting fully clothed into the Atlantic Ocean.

The former tennis coach, from Gloucester, started his feat in April last year by dipping his hand in the Pacific Ocean at Cape Alava in Washington, the most western point of the US, and has taken more than 11 million steps.

On Wednesday, Mr McDonald ran his final six miles to the beach at Fort Point in Gloucester, where he was welcomed by hundreds of well-wishers.

Broadcasting live on Facebook, Mr McDonald said: “I just want to say… America, I couldn’t have done it without you.

“Every single person is in my mind right now. I could never have made if it wasn’t for the people of America who got me to this point.”

Running into the ocean, he added: “It’s got to be done.”

Speaking earlier, he said: “I’m a Gloucester boy so to finish in Gloucester is really special.

“When I ran through on my final marathon it was just electric. All the cars were honking their horns – the energy has completely shifted and it’s mind-blowing to make it and get here.

“The Americans have been amazing. I just feel like America has got behind me. In the last few months, I haven’t put my tent up once and families have been taking me in.”

Running by himself and without a support crew, Mr McDonald has battled through desolate and lonely deserts, sub-zero temperatures and the constant threat of wild animals, injuries and the uncertain elements.

“The desert was over 50 degree heat in the day and I wasn’t sure I was going to get through that, so I started to run at night.

“I left this little town of 100 people and started running through the night and after a few hours, it got to about 12 o’clock, this car drives past me and it turns around and comes back.

“The car pulls up next to me and the window comes down and this woman says, ‘I don’t know whether to tell you or not but a mile up the road where you’re running, we just spotted a mountain lion. Bye and good luck’.

“I went into proper panic mode. I got this little penknife, which is all I had, and I was on absolute high alert. I got the head torch on and every single noise I heard I thought was the mountain lion.

“I kept lighting up the desert. After an hour there was no sign of the mountain lion but I heard another noise and I shine the torch and there was a huge tarantula.

“As I started to run off, there was hundreds of tarantulas all over the road and I’d hit a massive colony. By this point, I’d forgotten all about the mountain lion because I am frightened of spiders.

“I ended up making it through the night and met a local in the next town and he told me seeing all those tarantulas is a once-in-a-lifetime thing.”

When he returns to his home city of Gloucester in the UK, he will attempt to break the Guinness World Record for the greatest distance covered on a treadmill in a week.

“It works out at about three marathons a day for seven days. Doing this run has made me realise that I’m probably now at the strongest I have ever been physically,” Mr McDonald said.

“And for me it’s about making the biggest difference possible and if I do the seven days on the treadmill, I don’t think there is a greater challenge on the planet right now.

“It’s in one spot and it means the whole community of my home town can get together, can join me. I think we will raise a lot of money.”

Mr McDonald, who suffered from a debilitating immune deficiency and the potentially fatal spinal condition syringomyelia as a child, spent the first nine years of his life in and out of children’s hospitals.

Just weeks after returning to Gloucester, he set a new world record for cycling nonstop on a static bike.

In February 2013, two months after setting the new world record, he began a run across Canada.