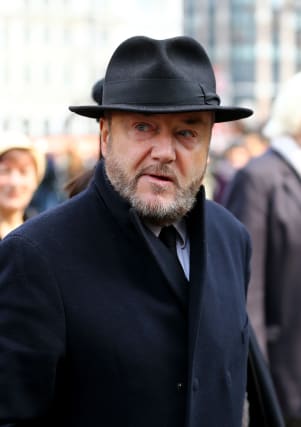 The former MP’s talkRadio platform could now face sanctions including the shortening or revoking of its licence after Ofcom found Galloway was in breach of impartiality rules.

Hosting phone-ins on the Labour anti-Semitism allegations, Galloway was found to have framed the controversy as a vehicle to attack the Labour Leader, and received broad support for his view.

When he received a dissenting opinion in a text, Galloway called the sender an “ignorant woman”, and branded another listener who disagreed with him as a “rag picker”.

Galloway was found in breach on two counts over the Corbyn material. In addition to a previous broadcast on the Salisbury poisoning case, Galloway has been found in breach of the rules by Ofcom three times. The watchdog is now considering sanctions against his radio platform.

A spokesman for Ofcom said: “Our investigation found that these phone-in programmes breached our due impartiality rules. They failed to give due weight to a sufficiently wide range of views on allegations of anti-Semitism within the Labour Party.

“We are minded to consider imposing a statutory sanction for these breaches. The Licensee now has an opportunity to make representations to us, which we’ll consider before proceeding further.”

Ofcom received complaints about Galloway’s shows on July 27 and August 6 2018, prompting an investigation into due impartiality.

The watchdog found that while it was legitimate to broadcast programmes in support of Corbyn, principles of balance had to be maintained.

Ofcom said it is concerned that Galloway continues to “express pride” in his broadcasts despite their content breaching rules.

TalkRadio could now face sanctions, which may include a fine of up to £250,000, in light of the fact that Galloway has been found in breach of the rules multiple times on the station.

Galloway’s show has previously breached impartiality rules with comments that aired after the Salisbury poisoning involving Yulia and Sergei Skripal.

On three occasions, when the audience contributions opposed his own views position, Galloway joked that the listeners who had sent in their dissenting messages were in Broadmoor psychiatric hospital.

Ofcom investigated a complaint that the programme, broadcast on March 16, contained “biased and unbalanced views” about the response of the UK and Russian governments to the poisoning.