Corbyn’s security under review after egg attack from Brexit supporter 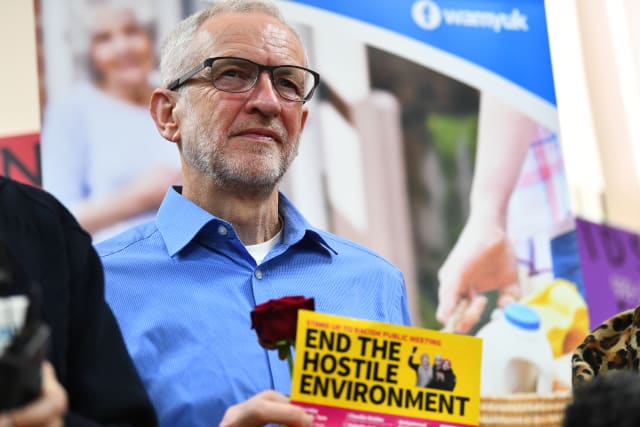 Jeremy Corbyn is reviewing his security after a Brexit supporter hit him with an egg while yelling “respect the vote”, it has emerged.

The leader was visiting a mosque in his constituency less than a week after Labour announced it would support a second referendum on EU membership when he was attacked by 31-year-old John Murphy.

The assault on March 3 came amid heightened tensions over Brexit, with Remain-supporting politicians telling how they have received death threats and MPs being warned about their safety.

Murphy was told by Chief Magistrate Emma Arbuthnot that he may be jailed after admitting assault by beating in order to send a clear message that “attacks on MPs must stop”.

Mr Corbyn, in a statement read to Westminster Magistrates’ Court, said he was “shocked and surprised” by the egging.

“I feel these kind of attacks drive a wedge between elected representatives and those who elect them in the first place. We are now reviewing and increasing my security protection,” he said.

Mr Corbyn had gone to the Muslim Welfare Centre with shadow home secretary Diane Abbott after visiting north London’s Finsbury Park mosque, which was the site of the terror attack by far-right extremist Darren Osborne.

Prosecutor Kevin Christie told the court that Mr Corbyn took off his shoes and sat down next to his wife Laura Alvarez and a group of people who seemed to be “in great spirits”.

“Suddenly, he felt a strike to the right side of his forehead and then realised someone had reached over his right shoulder and struck him,” Mr Christie said.

“As he was struck he heard a male voice shouting: ‘Respect the vote.'”

Mr Corbyn, after washing the egg off to reveal a red mark on his head, witnessed a “very aggressive” Murphy being restrained while his face was “contorted” with rage.

Murphy, of Barnet, north-west London, continued to yell the slogan as he was held.

The Labour leader said in the victim impact statement that he was “determined” to continue to interact with the public, but accepted he must now “be more cautious”.

Labour declined to comment on the increased security measures.

In recent days, independent MP Anna Soubry said she was targeted by “very, very serious” death threats and Labour’s Lloyd Russell-Moyle said a man shouting “traitors” grappled with him in an attempted assault.

MPs have also been warned by Commons Deputy Speaker Sir Lindsay Hoyle to travel by taxi or with colleagues because of the hostile climate.

Prime Minister Theresa May has faced heavy criticism from MPs, who accused her of whipping up tensions and putting them at risk of physical attack after she blamed them for delaying Brexit in a Downing Street speech.

Ms Arbuthnot told the court she is considering a short prison sentence for Murphy, who had been equipped with four further eggs.

“This is a public servant and attacks on MPs must stop. The message must go out – this must stop,” she said.

Malik Aldeiri, defending, said Mr Corbyn’s statement was “slightly over egged in the sense that Mr Corbyn himself hasn’t suffered any impact”, with the main concerns being from his family.

Murphy, of Totteridge Common, in Whetstone, was bailed until later in the day when he may be sentenced.

'A scotch egg is a substantial meal' reiterates Gove