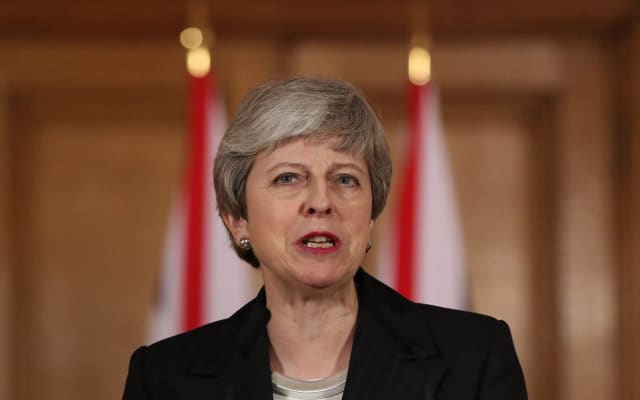 Speculation that Theresa May will be ousted from Number 10 has reached fever pitch amid reports that Cabinet ministers are plotting a coup to get rid of her.

The Prime Minister could be forced to resign within days, one paper claimed, amid a furious backlash over her handling of Brexit.

However, Philip Hammond has accused MPs allegedly trying to oust the Prime Minister of being "self-indulgent", amid reports that his Cabinet colleagues are plotting a "coup" to get rid of her.

Mrs May's former policy adviser MP George Freeman said it was "all over for the PM", tweeting: "She's done her best. But across the country you can see the anger.

"Everyone feels betrayed. Government's gridlocked. Trust in democracy collapsing. This can't go on. We need a new PM who can reach out (and) build some sort of coalition for a PlanB."

Tory backbencher Anne-Marie Trevelyan wrote in the same paper: "We now need a leader who believes in our country and wants to take her on the next stage of her journey."

Conservative peer Lord Gadhia, a former member of David Cameron's inner circle, said the upcoming days in Parliament may be "very dramatic" and could see the end of Mrs May's time as premier.

The Sunday Times reported 11 Cabinet ministers had told the paper they wanted Mrs May to make way for someone else and that the PM's de facto deputy David Lidington was in line to take over the helm.

But the Mail on Sunday reported ministers were plotting to install Environment Secretary Michael Gove as a caretaker leader.

On Saturday, around one million people were said by organisers to have joined a march on Parliament demanding a final say for the public over Brexit.

Elsewhere, pro-Brexit campaigners will continue their long hike from the North East to the capital, leaving Loughborough on Sunday morning.

After another turbulent week for the Prime Minister which saw her come under fire for delaying Brexit and seeking to blame MPs for the impasse, the Commons was expected to be given the third chance to vote on her Withdrawal Agreement this week.

But on Friday night Mrs May wrote to parliamentarians warning if there is insufficient support for her Withdrawal Agreement in the coming days that she could seek an extension to Britain's EU membership beyond the European Parliament elections.

Mrs May said she was holding Brexit meetings over the weekend as she tweeted pictures of herself on the local election campaign trail in Milton Keynes.

Tory former Brexit secretary David Davis argued leaving without a deal on World Trade Organisation terms "looks much better than the other options in front of us" in a piece for the Sunday Telegraph.