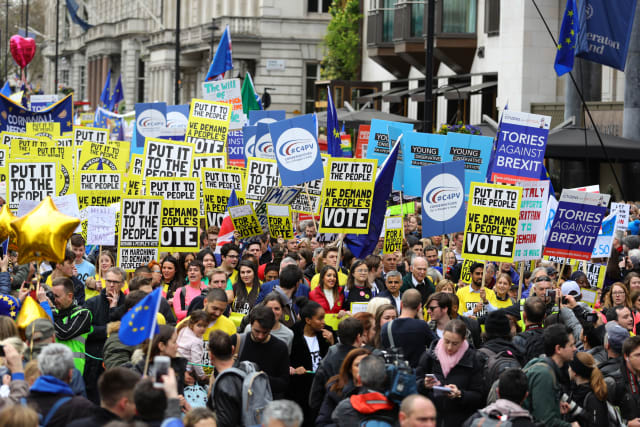 Hundreds of thousands of people descended on central London to join a march on Parliament and demand a final say for the public over Brexit.

Organisers of the Put it to the People march claimed one million people joined the peaceful procession through the capital.

MPs lined up on stage to address the crowds outside Parliament and call on the government to provide a People’s Vote on Brexit.

Labour’s deputy leader Tom Watson accused the Prime Minister of having “lost control” of the Brexit process and said he could only back her deal if “you let the people vote on it too”.

Former Conservative, now Independent, MP Anna Soubry urged her parliamentary colleagues to “put your country first, get into the lobbies and vote for a People’s vote”.

Also addressing the crowds, Sadiq Khan, Mayor of London, called for Article 50 to be withdrawn.

“It’s time to give us, the British people, a final say on Brexit,” he said.

The march began at around midday, with protesters streaming from the bottom of Park Lane and along Piccadilly.

Demonstrators flooded central London, spilling over into parks and side-streets.

A raucous noise of marching bands, music, whistles, chants and cheers accompanied the crowd as it wound its way through the capital.

Messages on placards said “Revoke Article 50” and “Put it to the People”.

Marchers were lead in chants for a “People’s Vote now” and many wore yellow fluorescent stickers reading “Bollocks to Brexit. It’s not a done deal”.

Large screens positioned along Whitehall told people how to text and tweet support for a People’s Vote and a series of supportive video messages were played from celebrities including Stephen Fry, Gary Lineker and Delia Smith .

In Parliament Square, a giant banner, organised by anti-Brexit campaign group Led by Donkeys, was unfurled above the crowd carrying a quote by leading Brexiteer David Davis: “If a democracy cannot change its mind, it ceases to be a democracy.”

On Twitter, Labour MP Jess Phillips said the event was “the nicest march I ever attended”.

The day’s activities were earlier kicked off by the unfurling of a large banner on Westminster Bridge that read “Love socialism, hate Brexit”.

The stunt was organised by a group calling itself the Left Bloc which is supported by Labour MPs, trade unions and grassroots campaigners.

Campaigners arrived in the capital from across the country, with one taking on a 715-mile journey on ferries, trains and buses from Orkney in Scotland.

Student Sorcha Kirker, 27, was due to be joined by about 30 other students from the University of the Highlands and Islands.

Retired couple Chris and Sue Ellery-Hill said they had left West Cornwall at 3am with 220 people in four coaches to get to the march in the capital.

Writer and film-maker Graham Hughes, 40, from Liverpool, said Brexit was “the most stupid thing that any country has ever done to itself in the history of the world”.

“Freedom of movement is an absolute gift and these people want to take this away.”

Saturday’s demonstrations follow EU leaders agreeing to delay Brexit to give Prime Minister Theresa May a final chance to get her deal through Parliament.

Leaders agreed to extend Brexit to May 22 if Mrs May can get MPs to back her deal in the Commons at the third time of asking.

If the vote is not passed, the UK will have to set out an alternative way forward by April 12, which could mean a much longer delay – with the UK required to hold elections to the European Parliament – or leaving without a deal at all.

An online petition demanding the Government stops the Brexit process had topped four and a half million signatures by Saturday evening.

It is now the most popular ever submitted to the Parliament website, moving ahead of a 2016 petition calling for a second EU referendum.