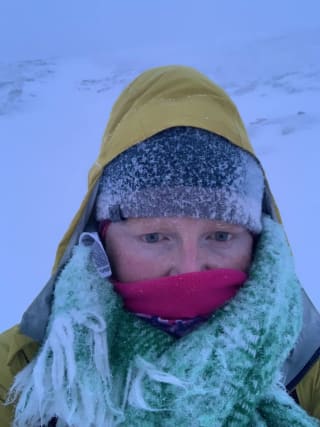 A father-of-three has scaled Pen y Fan – the highest peak in south Wales – for the 365th time in the space of a year.

Des Lally, 43, was joined by supporters who formed a guard of honour and cheered as he reached the top of the Brecon Beacons mountains on Saturday.

He has raised more than £50,000 for charities Help for Heroes and Cancer Research UK.

The mortgage broker began his challenge on the 2,907ft (886m) mountain on March 28 last year, supported by his family and three children.

He has often walked late at night or early in the morning in darkness, battling through the pain barrier and enduring weather conditions from gale force winds to snow.

In the summer, he had to suspend his challenge for 10 days after suffering from heat exhaustion.

To finish on time, Mr Lally has completed the walk multiple times per day – including on Friday, when he scaled the mountain three times.

Speaking at the summit, he told the Press Association: “Today is the end of a long year, I’ve been coming up Pen y Fan 365 times in 365 days for Help for Heroes and Cancer Research UK.

“It’s been a massive journey and we’ve all been on it – it’s not just me.”

Mr Lally climbed the mountain on Saturday with his father, Des Lally Snr, 76, who previously served with the Irish Guards.

The veteran, who has had treatment for cancer and has a heart condition, climbed Pen y Fan for the first time since his days in service.

He served for 26 years with the Irish Guards in Germany, Hong Kong, Singapore, Malaysia, Belize and Canada before retiring in Brecon in the 1980s.

Father and son were welcomed to the mountain by a cohort from the Regimental Band of the Royal Welch Fusiliers.

“I’m not an emotional guy but there was a tear in my eye,” Mr Lally said.

“I’m pretty chilled but it was an emotional time.”

He has worn through seven pairs of trainers during the challenge, in which he has covered around 1,360 miles.

Mr Lally’s mother Anne and father Des have had three different types of cancer between them.

“It’s just something I wanted to do to give a little back,” he said.

“I wanted to do something a bit different and unusual that would raise the profile of the charities – but I wasn’t expecting so many other people to take my personal challenge to their hearts.”

Many people have joined him including schools, choirs and community groups, as well as celebrities including Tour de France winner Geraint Thomas.

Shelley Elgin, community recovery manager at Help for Heroes Wales, said: “Des epitomises the spirit of our amazing supporters, going above and beyond to give something back to the Armed Forces personnel who have put their lives on the line for us.

“The work we deliver to support those whose lives are affected by their military service wouldn’t be possible without people like Des giving their time so selflessly. We are very grateful.”

Anyone wishing to donate can do so at https://uk.virginmoneygiving.com/DesLally.