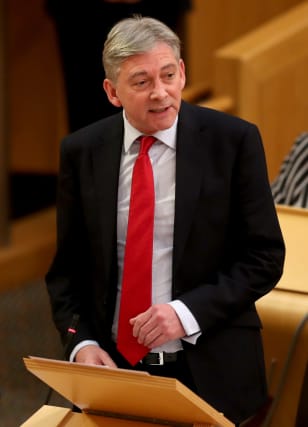 Nicola Sturgeon has denied Labour claims of a staffing crisis in the NHS, saying record numbers of people are employed in the Scottish health service.

Last week, another person died after contracting a fungal infection following admission to QEUH on January 7.

In the week an inquiry into the infections at the Glasgow hospital began, Mr Leonard claimed there was a staffing crisis, with the number of domestic staff falling by 24 last year.

At First Minister’s Questions, Mr Leonard said: “In March 2018, 464 cleaners were employed at the hospital, but according to latest figures that number has dropped to 440.

“First Minister, why, at the very point it is facing a rise in infection outbreaks, is Scotland’s biggest hospital employing fewer people on the front line whose job it is to keep that hospital clean and safe.”

He added: “It’s clear we have a staffing crisis in our health service and it’s not confined to consultants, nurses and midwives.

“It’s facilities staff, it’s domestics, it’s catering workers, it’s porters and it’s laundry staff too. All workers without whom no hospital can operate.”

“Staffing levels in NHS Scotland are now at a record high and are up by over 13,600 since 2006 – just before this Government took office.

“The number of consultants are up by 51%, qualified nurses and midwives up by 8%, there is higher NHS staffing per head in Scotland than there is in NHS England.”