‘Forrest Gump’ Briton close to finishing charity run across US 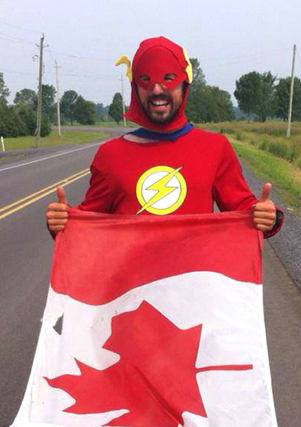 Jamie McDonald, 32, will complete the mammoth challenge in Gloucester, Massachusetts, on March 27 – 11 months after starting his trip dressed as superhero Adventureman.

During the run, Mr McDonald – who is Britain’s answer to Forrest Gump – has visited sick children in hospital and has raised more than 150,000 US dollars (£113,440) along the way.

The former tennis coach, from Gloucester, started his feat in April last year at Cape Alava in Washington, the most western point of the US, and has taken more than 11 million steps.

He has so far completed 205 marathons, recently running 75 miles (121km) – just shy of three marathons – in one day alone.

“After a year running, choosing a route that allowed me to visit as many of the children’s hospitals we’re supporting as possible, I can’t believe I have just a week left,” Mr McDonald said.

“I’ve set the timings for the finish now, and am inviting members of the public to join me for the final miles on my last day next Wednesday – superhero costumes are optional but very much preferred.

“I’ve listened to some heart-breaking stories from the children I’ve met in hospitals over the last 4,500 miles (7,242km).

“But each injury and each twist and turn has only made me stronger and more determined. I want to help, because I know I can. I know that we can.”

Running by himself and without a support crew, Mr McDonald has battled through desolate and lonely deserts, endured sub-zero temperatures, and faced the constant threat of wild animals, injuries and the uncertain elements.

When he returns to his home city of Gloucester in the UK, he will attempt to break the Guinness World Record for the greatest distance covered on a treadmill in a week.

He added: “All I can ask is, please do keep donating. My fundraising goal was 1 million US dollars, and although we’re some way off that right now, I’m still holding out hope we can get closer to it, especially with the world record coming up.

“Please keep sharing, and please keep believing that we can make the world a better place for sick kids everywhere.”

Mr McDonald, who suffered from a debilitating immune deficiency and the potentially fatal spinal condition syringomyelia as a child, spent the first nine years of his life in and out of hospital.

Just weeks after returning to Gloucester, he set a new world record for cycling non-stop on a static bike.

In February 2013, two months after setting the new world record, he began his run across Canada.