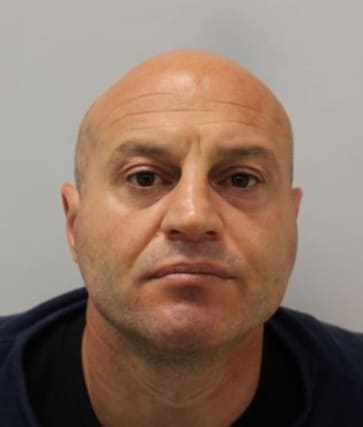 A Scarface fan who went on a three-year killing spree across Europe has been found guilty of his fifth murder in Britain.

He used a pick axe handle, lock knife and cheese knife to inflict more than 120 wounds on Mr Mone in a “brutal and merciless” attack at the victim’s flat in Wembley, north London.

Mr Mone’s six-month pregnant girlfriend Zoe Blay found his body the following day but could only identify him by his distinctive belt buckle.

Jurors, who deliberated for two-and-a-half hours, were told how stonemason Driza had become furious that his flatmate Mr Mone had taken his wedding ring and given it to his partner.

He had moved in with him after his brief marriage to Brazilian cleaner Rosie Driza broke down, the court heard.

In a bizarre twist, it can now be reported that Mrs Driza later became involved with a 60-year-old immigration judge who referred to her as “real chilli hot stuff” in emails.

In 2007, she was cleared at the Old Bailey of charges that she stole two explicit sex videos from the male judge and blackmailed a female judge.

Mrs Driza, who was later deported, was not called to give evidence in her ex-husband’s trial.

Jurors heard how Driza’s attack on Mr Mone came two years after he shot a father and son dead in his home village and fled to Britain under the assumed name Sokol Drenova.

After killing his third victim – Mr Mone – he took a flight to Italy, where he shot and killed two men at a bar in Catania, Sicily, six months later.

He tried to kill a third man in the bar but his gun jammed, jurors heard.

While in prison in Sicily in 2000, he was interviewed by Scotland Yard about the killing in Britain.

He claimed Mr Mone had been in prison with one of his victims in Albania and had been paid to avenge his death.

According to translators, he said: “He was sure of one thing – that Bledar Mone was paid to kill him, because before this Bledar Mone was in prison together with the man he killed in Albania.

“He went to live with him because he had caused him to gain his trust.”

On the day of the killing, Driza claimed Mr Mone had come at him with a knife and struck him with a baseball bat.

An interview transcript stated: “He saw a lot of blood. He does not remember because he lost control of himself. The whole problem was Bledar Mone wanted to kill him.

“First Bledar Mone hit him then he says perhaps he hit him too. He remembers the moment he hit him with the knife.”

Referring to the Albanian shootings, Mr Mone’s last words to him were: “You have killed so many – two – that’s enough now,” the court was told.

In 2001, in Albania, Driza was convicted in his absence  of two charges of “premeditated murder in complicity of citizens” along with his father.

In June 2002, he was convicted in Sicily of conspiracy to murder Maskaj Artan and Blushaj Albert, and the attempted murder of Maskaj Lefter.

The court heard that Driza’s sentence in Italy runs until 2026.

She told the impassive defendant: “As you know the sentence for murder in this country is fixed by law and I will be passing a life sentence upon you.

“The only question for me to resolve is how long a term you should serve as part of that life sentence and what, if any, part during which you have been remanded should count towards that sentence I pass.”