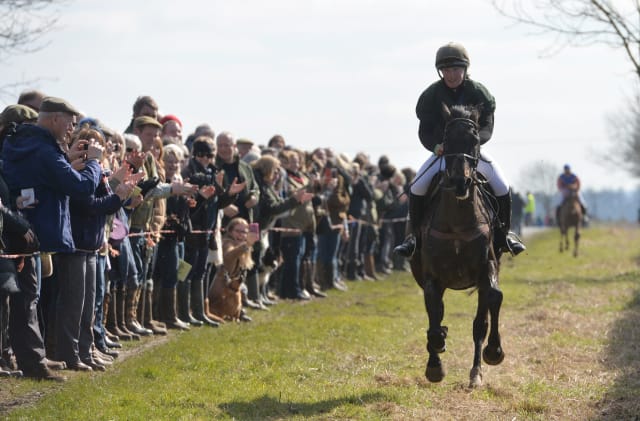 Dozens of riders are expected to take part in England’s oldest – and some would say quirkiest – horse race as it celebrates its 500th anniversary.

The Kiplingcotes Derby, near Market Weighton, East Yorkshire, has run every year since 1519 and traditionally takes place on the third Thursday of March.

Organisers said spectators are travelling from across the world to witness the riders competing along the four-and-a-half mile flat course over the countryside of the Yorkshire Wolds.

Retired farmer Guy Stephenson, 86, is one of the race trustees and has helped organise the event for around 30 years.

Mr Stephenson said the derby has been a tradition in his family for the last 100 years, with a number of family members either winning the race in the past or owning the winning horse.

He said the race could attract a large number of riders wanting to take part this year to mark the anniversary.

He said: “I think we are expecting a lot of entrants. They just turn up on the day but we have had a lot of queries.

“Normally we have around 13 to 15, that’s our average. We could have 50 this year. It might cause us a few problems but we will have to wait and see. We’ll cope.”

He added: “There’s quite a few come to win it and some come just to say they’ve run in the race.

“There’s even a couple coming to ride side-saddle.”

Mr Stephenson said the anniversary and the history of the event has attracted international visitors.

He said: “We have a family of eight coming over from Canada whose ancestor lived in Middleton-on-the-Wolds in 1519 and they’re thinking he might have been at the first running.”

Mr Stephenson said the weather was “looking fine” for Thursday’s race – which, according to ancient tradition, must run every year or be cancelled forever.

Its future has been put at risk several times over its lifetime, with a waterlogged course last year, the foot and mouth outbreak in 2001 and four feet of snow covering the course in 1947.

On these occasions, a volunteer had to walk or ride a horse along the course in order to keep the tradition alive.

Mr Stephenson said: “That’s all in the rules. Someone has to walk or ride a horse down it somehow.”

Another of the race’s traditions sees the winner pocketing a £50 prize but the rider who takes second place receiving £4 of every £5 race entry fee – a potentially much larger reward.

The race dates back to a time when Henry VIII was King of England, with a set of rules discovered in a vault in a bank giving the start year as 1519.

Anyone can enter – as long as they weigh, or carry, at least 10 stone – but riders this year have been warned that they need to be “very experienced with a fit horse”.

The course runs along lanes and roadside verges – complete with gullies, deep puddles and rough surfaces – and riders must hack their way to the start before galloping back to the finishing post.

Mr Stephenson said it was be “business as usual” at the derby this year, although there would be commemorative badges and a book of the race’s history on sale to try to raise funds towards the £12,000 cost of the event.

He said he fears that the rising costs of putting on the race will make it harder to run in the future.

He said: “When I first started doing it, you turned up on the day, you didn’t have anything to do the day before, you found the £50 for the winner and that’s all you had to do.

“Hopefully they’ll keep it going, it would be a shame for it to end after all these years.”