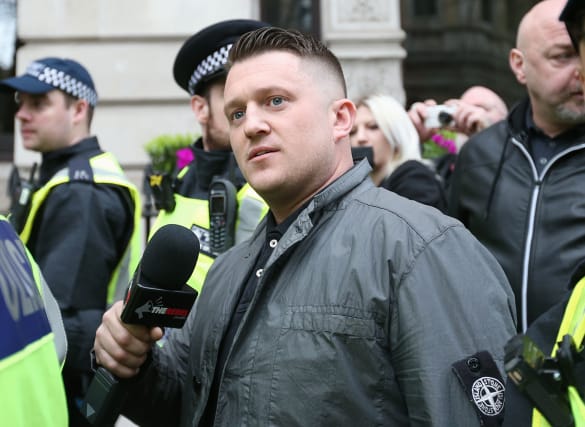 A court hearing over an allegation that Tommy Robinson committed contempt of court by filming people in a criminal trial and broadcasting footage on social media has been postponed.

Attorney General Geoffrey Cox QC announced earlier this month that it was in the public interest to bring proceedings against the former English Defence League (EDL) leader, whose real name is Stephen Yaxley-Lennon.

The first hearing was due to take place at the High Court in London on March 22, but the court confirmed on Tuesday that the case will not be heard until some time after May 3.

A spokeswoman for the Attorney General’s office said Robinson’s lawyers had requested that the hearing be postponed.

Robinson was jailed for 13 months in May last year after he filmed people involved in a criminal trial and broadcast the footage on social media.

It was filmed during the trial of four men who were later convicted of gang-raping a teenage girl.

But a contempt finding was quashed by the Court of Appeal in August and he was freed on bail pending new proceedings at the Old Bailey.

Recorder of London Nicholas Hilliard QC then referred the case to the Attorney General in October, after the judge received a statement from Robinson.

The 36-year-old could be sent back to jail if he is again found in contempt.

Robinson has vowed to contest, “along with the support of the British public”, the Attorney General’s decision, adding: “I am innocent. I broke no law.”

Crowds of supporters gathered outside the Royal Courts of Justice and the Old Bailey for the previous hearings, and Robinson made an address at the October hearing.

A statement from the Attorney General’s office on March 7 said Mr Cox had reached his decision based on an assessment of the evidence and whether it was in the “wider public interest”.

Mr Cox said: “After carefully considering the details of this case, I have concluded there are strong grounds to bring fresh contempt of court proceedings against Stephen Yaxley-Lennon (aka Tommy Robinson).

“As proceedings are now under way, it would not be appropriate to comment further and I remind everyone that it is an offence to comment on live court cases.”