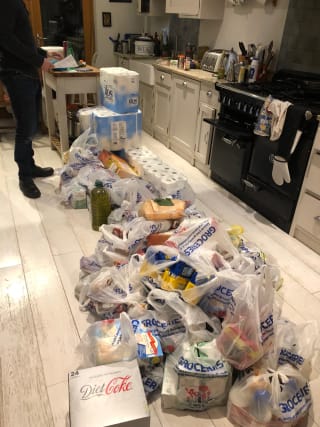 A woman has called her husband “mad” after he spent more than £600 on a shop in preparation for a no-deal Brexit.

Juliet East took to Twitter to share a picture of the supermarket haul, which includes 144 rolls of toilet paper and more than 50 tins of food.

After looking at lists suggesting items to stockpile, her husband Tony Smollett put in an order with Tesco that totalled £658.29.

Ms East, who works in the hospitality industry, said she did not tell him how much to buy for the family of five and “couldn’t believe” the amount he ordered.

“I didn’t think he was going to buy so much,” she said.

“He just went mad and bought lots of everything. He was laughing at the situation and said he doesn’t want anyone online to think he’s mad.”

Ms East, from Worcestershire, said she decided to stockpile certain items when they began planning for a no-deal scenario at her work.

She said: “It’s becoming increasingly apparent that no-one knows what is going on.

“Many of our favourite foods come in from overseas and we don’t want to run out of things if there’s a shortage of certain items.

“It’s the same way people fill their cars with petrol when there’s a shortage.”

The prospect of a no-deal Brexit increased on Monday after the Commons Speaker John Bercow ruled the Government could not bring Theresa May’s deal back for a third “meaningful vote” unless there were substantial changes.

The tweet, in which Ms East said she was “gently mocking” her 58-year-old husband, an IT director, attracted hundreds of comments and likes online.

She added the reaction on Twitter was not always positive, with other users giving her a “hard time” about the cost of the food and suggesting she was causing a sense of panic.

“We’re a family of five, we have big shopping lists,” she said.

“I’m the last person to try to create a panic. We’re just keeping all of the bases covered.”