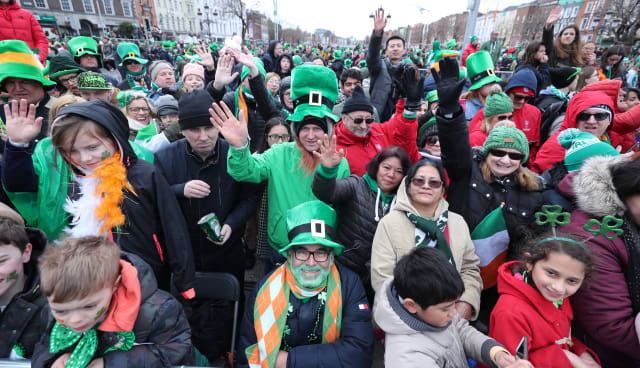 Hundreds of thousands of people have attended St Patrick’s Day parades in cities, towns and villages across Ireland.

Young and old alike of all nationalities lined streets across the country dressed in varying shades of green on Sunday to celebrate the national day.

In his traditional St Patrick’s Day message, Irish President Michael D Higgins said: “May I, on this St Patrick’s Day 2019, send my warmest greetings as Uachtaran na hEireann, President of Ireland, to all our extended family across the world.

“Wherever you may be, and in whatever circumstances, you are part of Ireland’s global family joining with us as we celebrate our shared Irishness, its culture, heritage and history.

In Dublin, President Higgins and his wife Sabina joined the crowds that thronged central Dublin for the country’s flagship parade, which got under way around midday before bright and sunny conditions turned more cold and blustery.

It was led by the Lord Mayor of Dublin Nial Ring and grand marshals Deirdre O’Kane and Jason Byrne.

Large crowds gathered from early morning to nab the best vantage points. Every window sill and even some lampposts were used to gain some height to watch the parade pass by.

Pageant ensembles and arts groups from the capital and further afield delighted onlookers with colourful costumes, larger than life puppets and dancing performers.

The theme of this year’s parade was storytelling. It featured marching bands from home and abroad including the US and Germany.

Participants made their way from Parnell Square across the Liffey to St Patrick’s Cathedral over several hours in the afternoon.

They had managed to nab a coveted vantage point on Dame Street to watch the floats and marching bands pass by.

“I hope we’ll last,” she said as she balanced on the edge of an old water fountain on the street.

“We haven’t been in to the Dublin city parade for a couple of years so we thought it would be nice to bring the kids in,” she said.

Rachel, 11, said she loved the marching bands, while her sister Louise, 10, said the big floats were what she enjoyed the most.

Vanessa Ives and Kim Mac Quet were among the thousands of international visitors lining the streets of the capital.

The friends travelled from South Africa to attend the parade during their first trip to Ireland.

“We love it here. We’re definitely coming back,” they said. But they said that they had come from a heatwave in Johannesburg so they were feeling the cold.

They donned green tops, green skirts and had even dyed their hair green for the day.

“The atmosphere is great but we think it’ll be even better when people have a couple of pints,” Ms Ives said.

Ms Mac Quet said she had decided to visit Ireland to put her Irish passport to use for the first time. Her grandparents were from Ireland.

Michael Morel travelled from Paris with his father Patrick and 11 of their friends for the festivities.

More than 3,000 community groups got involved in the parade, the theme of which was Stories of Cork.

About 50,000 people were expected to attend.

A similar number was expected to line the streets of Limerick. The theme of its parade, which took place on O’Connell Street in the city, was the wonders of space.

In Galway Paralympic medallist Shane Curran was the guest of honour, while the earliest parade of the day got under way in Dingle. It began at 6am.

The Taoiseach Leo Varadkar said reaching out to the Irish diaspora, the 70 million people who call Ireland home, was really important, especially on Ireland’s National Day.