Varadkar: Everyone equal before the law regardless of who they love 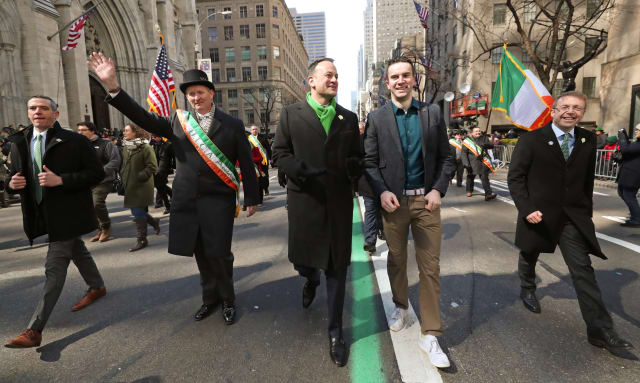 Everyone is equal before the law regardless of who they love, Irish premier Leo Varadkar has said.

Days after Mr Varadkar delivered his anti-discrimination speech at a meeting with US vice president Mike Pence, the Taoiseach said he wanted to express Ireland’s values.

Mr Pence, who has a history of anti-gay policies, hosted the breakfast meeting with Mr Varadkar and his partner Dr Matt Barrett on Thursday.

Mr Varadkar is Ireland’s first openly gay leader and one of very few openly gay national leaders in the world.

Speaking in Chicago on the final day of his St Patrick’s tour, the Taoiseach said he was not nervous about delivering the strong message.

“Ultimately Matt and I were guests in his home, so I wanted to make sure that what I had to say was respectful and I hope it came across that way, (and) at the same time expressing what are now Ireland’s values, that everyone is equal before the law regardless of their religion or lack thereof, their gender, the colour of their skin or who they love.

“I don’t really take him (Matt) to official events, he has his own life and his own career and doesn’t particularly enjoy coming along to events as my plus-one unless it’s a match or a concert, but when we got the invitation from the Pences it was different and he felt it was an invitation that he wanted to accept.”

Mr Varadkar has extended an invitation to Mr Pence and his wife, Karen, when they visit Ireland.

“They are a family with really genuine Irish connection to Co Sligo and to Co Clare,” the Taoiseach added.

He said that Ireland has made progress on women’s issues following last year’s historic referendum on the country’s abortion laws.

“Unfortunately in America I think things are so polarised, people watching different news channels and shouting at each other, refusing to engage with each other, and maybe we did it a bit differently in Ireland,” he added.