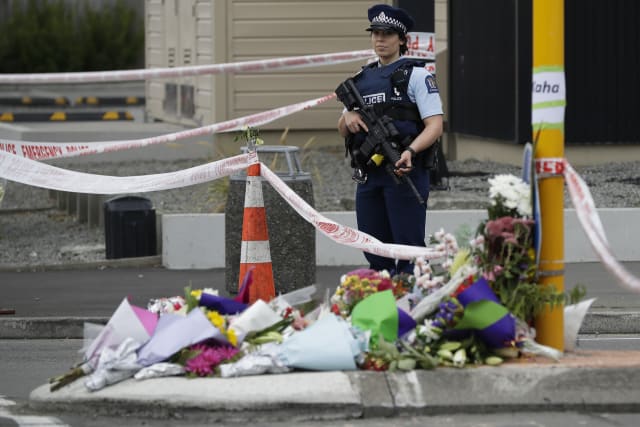 A tragedy that shocked the world captures headlines in Britain as national newspapers add their voices to the wave of condemnation for the New Zealand mosque shootings.

The deaths of 49 people at two mosques in the city of Christchurch are described as “heinous murder” and “an act of savagery”, while social media firms also come under scrutiny after a gunman appeared to have live-streamed the terror attack.

The Times calls the massacre “pure wickedness” and echoes New Zealand prime minister Jacinda Ardern’s words on those affected by the tragedy, saying: “They are us”.

“Those threatened by hatred and xenophobia are not outsiders but fellow citizens,” it writes. “Their welfare and safety are indivisible from all others in a free society.”

The paper also urges technology giants to crack down on the ability to use their platforms for “inhuman ends”, writing in its leader: “Terrorists in the digital age are able to combine ancient notions of the ‘propaganda of the deed’ with the means of broadcasting their crimes.”

The Daily Telegraph warns that social media firms get off too lightly when inappropriate content is posted on their sites.

“One cannot stop the technological change in communications, but it comes with ethical responsibility – and if ethics are not exercised then laws have to be written to enforce them,” it says.

“Blame for this horrendous slaughter lies squarely with the killer, obviously. But he was consciously pursuing a strategy of tension, trying to intimidate and terrify society into chaos and overreaction and, in the sense that social media was the medium by which he spread his frightening message, it has become an unwitting tool of extremists.

“What will the internet entrepreneurs and politicians do about it?”

The Daily Mail’s leader attacks the time it took for Facebook to take down the live-stream and says it exposed “staggering failures”.

It backs the words of Home Secretary Sajid Javid, who said tech companies “must do more” to stop the attacker’s message being broadcast.

The paper adds: “Despite countless warnings, these sites remain homes for obscene, violent and extremist material where would-be fanatics can flock with impunity.

“The Mail has long accepted the benefits of online technology, but the digital behemoths are, unquestionably, failing to face up to the social responsibilities that come with their awesome power.”

The Sun is similarly scathing of the tech companies’ response, criticising their “half-baked apologies and weasel words”.

Meanwhile, the Daily Mirror criticises politicians whose “language and actions feed a culture of intolerance and resentment”.

“If we want to halt the march of the far right we must challenge those who peddle hatred and stand with those who are under threat,” it says.

In a similar call for unity, the Daily Express says the only way to fight terrorism is to stand together.

“Terror cannot be allowed to divide us,” it writes. “We must stand strong together.”