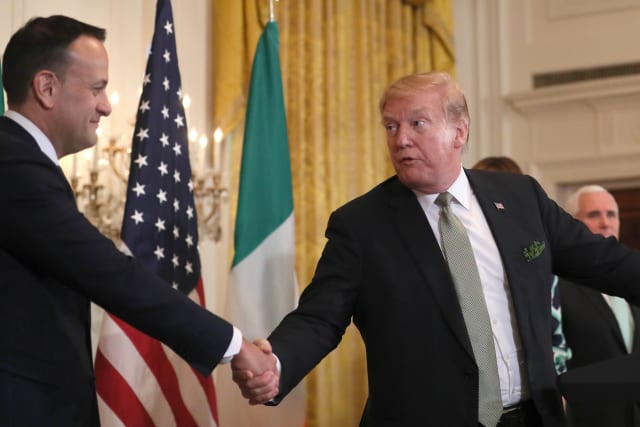 US president Donald Trump could visit Ireland as early as June as part of his trip to Europe.

Irish premier Leo Varadkar said “it would be most likely” Mr Trump would visit Ireland when he travels to Europe for the 75th anniversary of the D-Day landings later this year.

It comes after the US president confirmed he wanted to make the trip during a meeting with Mr Varadkar in the Oval Office in the White House on Thursday.

Mr Varadkar is in Chicago on the third day of his annual St Patrick’s Day tour to the United States.

“He (Mr Trump) is going to travel to Europe for the D-Day anniversary and for the Nato anniversary so it’s possible that he’ll make the trip to Ireland before or after one of those but it’s still early days yet,” Mr Varadkar added.

“There’s no firm dates discussed or agreed but he does intend to travel to Europe at least twice between now and the end of the year, it being added on to one of those visits would be most likely.”

One of Mr Trump’s golf courses is in the County Clare village of Doonbeg.

On Thursday, Mr Varadkar and his partner met with US vice president Mike Pence at his official residence in Washington DC.

In a speech, Mr Varadkar said that he is not judged by his sexual orientation but by his political actions.

Speaking in Chicago on Friday, Mr Varadkar said that while he did not discuss his speech with Mr Pence, they had a “good chat” about various issues.

“Obviously we have very different views on social policy but I think the best way to manage these things is to engage with people,” he added.

Mr Varadkar is to attend the Irish Fellowship Club of Chicago dinner on Friday evening before he takes part in Chicago’s St Patrick’s Day parade on Saturday.