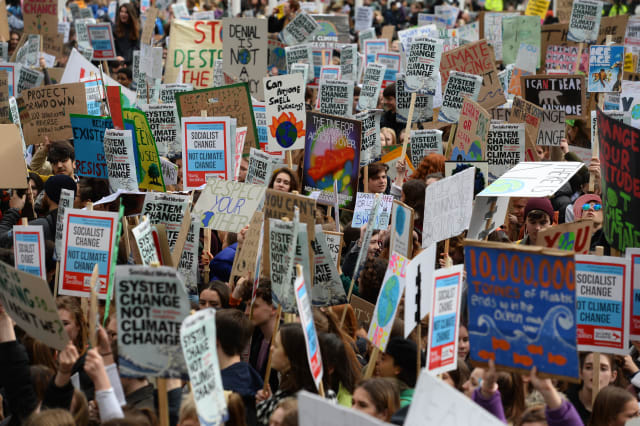 Students have walked out of lessons and lectures across the UK to protest against the “inaction” of politicians over climate change.

The school strikes are part of a global day of action which has seen young people take to the streets from New Zealand to Europe as part of an expected 2,000 events in more than 120 countries.

In Ireland, students also took to the streets in cities including Dublin.

Young people gathered in Parliament Square, London, with placards that read: “By the time we’re in charge it will be too late”, “we want you to panic” and “the greatest threat to the planet is the belief someone else will save it”.

They chanted “this is what democracy looks like” while primary school children, who were at the protest with their parents and holding handmade placards, shouted “climate change, boo!”

Joe Crabtree, 15, from south-west London, who is missing GCSE mocks for the protest, said: “I’m here today to send a clear message to Government that I’m fed up with inaction on climate change.

“I think they’re not doing enough to curb the problem that is climate change, leaving it to the side like us with homework, hoping it will get done, but it’s not being dealt with.”

He called for a “green new deal” to create low carbon jobs being proposed by Democrats such as Alexandria Ocasio-Cortez in the US, and for politicians to declare a climate emergency, stop investing in fossil fuels and back renewable energy.

Anna Taylor, 17, from north London – co-founder of the UK Student Climate Network, said the Government was failing to recognise the severity of the crisis.

On the global day of action, she said: “Young people feel empowered by other young people, this is very much a student-led movement.

“It’s something we all feel very passionate about, because it’s personal to us, it’s about our future.

“This is a broad movement and we are all striking in solidarity.”

The A-level student said her teachers were very supportive of what she was doing and, though they were “a bit concerned” about her missing lessons, they recognised the importance of the issue to her generation.

In central London, one student climbed very close to the top of the 25-metre high Queen Victoria Memorial in front of Buckingham Palace, which appears to have prompted the Metropolitan Police to urge people not to climb statues.

The global day of action has been inspired by teenager Greta Thunberg, who protests every Friday outside Sweden’s parliament to urge leaders to tackle climate change.

The strikes come in the wake of a UN report last year which warned limiting global temperature rises to 1.5C above pre-industrial levels, beyond which climate impacts become increasingly severe, requires unprecedented action.

That includes cutting global carbon dioxide emissions by almost half within 12 years, and to zero by mid-century.

Politicians including Labour leader Jeremy Corbyn and Environment Secretary Michael Gove have spoken of their support for the young climate strikers.

And United Nations climate chief Patricia Espinosa said young people around the world were sending a clear message “that nations must significantly increase their efforts to address climate change”.