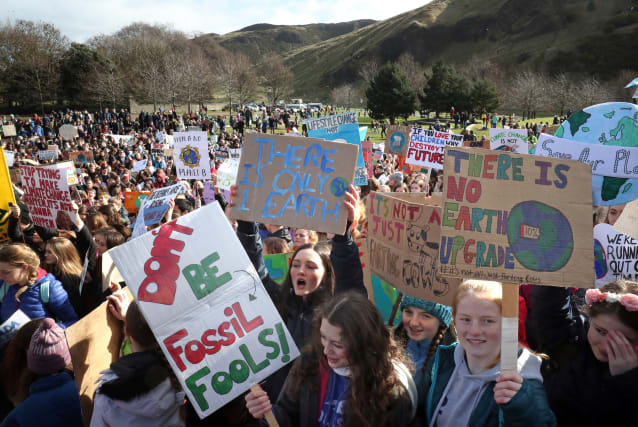 Hundreds of schoolchildren and students have gathered across the country to demand action over climate change.

The strikes of lessons and lectures follow similar days of action already taken around the world this year with Scottish youngsters protesting in at least 21 different locations on Friday.

In Edinburgh an event was staged outside the Scottish Parliament building, while young people in Glasgow descended on George Square chanting for change.

The sun was shining when the youngsters started to arrive at the square at 11am but a heavy downpour came over the protesters an hour later.

The 20-year-old said: “It was sunny five minutes ago and now it’s raining. If that doesn’t tell you something has to be done I don’t know what will. We’re in Scotland but that’s insane.

“The youth in Glasgow is really involved in climate change. I saw the big event on Facebook and thought I’d come along and support the cause.

“I passed here last month when it was on and there was a great crowd and atmosphere so I thought I’d come along this month.

“We’re out here saying that there’s not enough being done so we’re trying to get people to actually make a difference.

Many pupils and students of all ages came carrying signs and placards with slogans including “There is no Planet B” and “The climate is changing, why aren’t we?”.

He added: “A generation of young people who know that they’ve been failed on climate change by political parties, by governments, by corporations and they need to put new energy and urgency into this global crisis if we’re going to have a chance of a solution.

“These young people would otherwise have been in their classrooms, getting lessons about their future – they’re not going to have a future unless we radically transform our world and begin living sustainably.

“There’s not just one day of climate protests and then we solve it or don’t solve it. This is not a deal or no deal situation.”

Speaking to PA, he said: “Clearly all of these young people, some of them as young as primary school children, are here because they’re stirred by this as an issue.

“They think that this is an important challenge not just for today but for tomorrow. They want to show that they are not prepared to just sit back and allow other people take decisions about this.

“They want to make sure their voices are heard.”

Six-year-old Anna Arbuckle said she joined the George Square demonstrators “to stop the ice from melting”.

Protesting alongside her were older sister Lucy, holding a sign saying “This is my future – act now and stop climate change”, and Chloe Barker – both aged 10.

Lucy said: “The people in power aren’t taking control of the situation and we need to stop it from happening, otherwise our world will heat up and all the ice will melt and there’ll be no place for the polar bears and penguins.

“I came here last time as well and we saw it on the news, I said to my mum ‘we have to go, we’re responsible’.

“It’ll be our future, not the leaders of our country’s future, right now.”

Asked if she would one day be a future leader of the country, she said: “My granny says I will, but I’m not sure.”