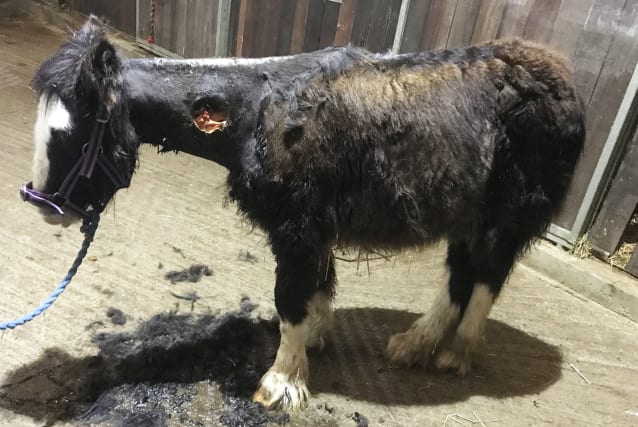 An abandoned pony found alone with a severe neck wound and a rugged coat has had her life changed by rescuers.

Paddy was discovered neglected in Sprotbrough, Doncaster, in January by the RSPCA with a four-inch wound on her neck.

But after nine weeks of care and treatment, her wounds have healed and Paddy, who is currently stabled in the Hull area, is ready to find a new home as St Patrick’s Day approaches.

Equine rehoming officer Jacqueline Wilson said: “Poor Paddy was in a sorry state when she was rescued by our inspector, and brought to us for care.

“We could see she had a nasty wound on her neck, but her shaggy coat made it difficult to know how bad it was at first. It wasn’t until the vet carefully clipped the hair away that the extent of her wound was visible, it was like a sore hole in her neck that was more than four inches wide. She must have been in so much pain, poor girl.

“Over the last couple of months, Paddy has recovered so well in our care, and where the wound once was looks almost normal again now. She’s very lucky she was found and we were called, and I’m so glad we were able to help her.

“Now, this sweet little pony is looking for a new start, and I would like to hear from anyone who is interested in adopting her. We think she would make an ideal companion or potentially family pony when she is old enough to start work.”

The appeal comes as the RSPCA launched their new Homes for Horses campaign to find homes for more than 1,000 horses and ponies in the spring.

Anyone who would like to find out more about adopting or fostering Paddy can call MS Wilson on 07825 158 255 or email her on jacqueline.wilson@rspca.org.uk.