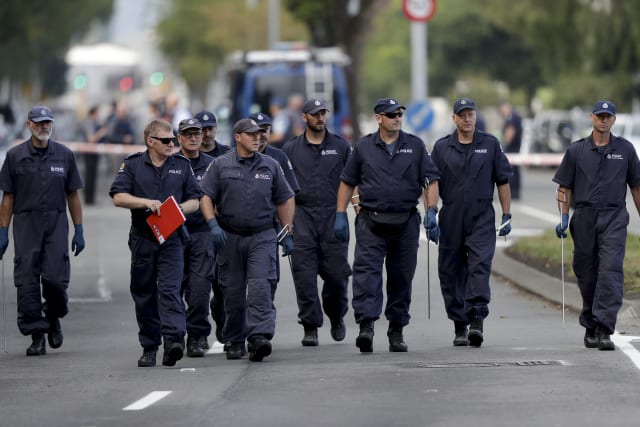 A man has appeared in court after 49 people were killed in shootings at two mosques in New Zealand as the prime minister vowed to change gun laws in the country.

Brenton Tarrant, 28, from Australia, appeared to have live-streamed the terror attack in Christchurch and outlined his anti-immigrant motives in a manifesto posted online.

On Saturday, Tarrant appeared in court in Christchurch charged with one count of murder and was remanded until April 5. Police said further charges were expected to follow.

New Zealand Police Commissioner Mike Bush said it took 36 minutes from the first emergency call on Friday before the suspect was in custody.

A search is currently under way at his residence in Dunedin.

“That person was not willing to be arrested,” said Mr Bush.

“There was live audio coming back to my command centre of that apprehension. That person was non-compliant.”

A total of four people were arrested following the massacre – one of whom was in possession of a firearm but with the intention of assisting police and was released a short time later.

Mr Bush said two of those in custody were arrested at a cordon, and that police were working to establish whether they had had any involvement in the incident.

She said the country’s gun laws would change in the wake of the attack.

On Saturday, Christchurch Hospital said that 39 people remained in hospital, 11 of them in intensive care.

Four people died en route to the hospital, while a four-year-old girl was transferred to a hospital in Auckland in a critical condition.

The majority of the patients are male aged 30 to 40, while two of them are boys aged two and 13, said Greg Robertson, chief of surgery at the hospital.

Of the 48 people admitted on Friday, seven have been discharged.

“Many of those injured will need multiple returns to surgery.”

Of those killed in the massacre, 41 died at the Masjid Al Noor mosque on Deans Avenue in central Christchurch, seven were killed at the suburban Linwood Masjid Mosque, and one person died at Christchurch Hospital.

In the video live-streamed by Tarrant, a man inside a mosque appears to say “Welcome brother” as a gunman approaches.

A number of improvised explosive devices found on a vehicle after the shootings were defused by police.

Mr Bush, who had earlier called the attack a “very well-planned event”, said the suspect was not known to police either in New Zealand or Australia.

British security sources said there were no apparent UK links to the attack.

Officers responded to reports of shots fired in central Christchurch at about 1.40pm local time (12.40am GMT), and urged people in the area to stay indoors.

Police urged all mosques across New Zealand to stay closed over the weekend for security reasons.