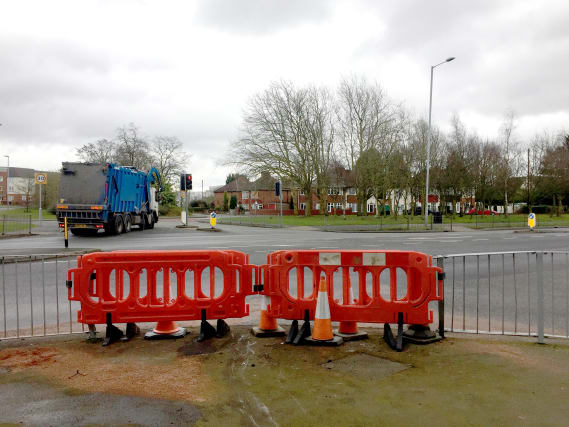 A Bentley driver arrested on suspicion of killing a toddler and his 10-year-old brother in a horrific crash allegedly told onlookers he was not to blame for the deaths.

Witnesses claim the man initially left the accident scene in Wolverhampton after being accused of “racing” with an Audi which struck a BMW at traffic lights on a dual carriageway.

Police are attempting to trace the Audi driver, who made off on foot as local residents attempted to help the victims and comfort and treat their mother.

Emergency crews were called to the crash at the junction of Lawnswood Avenue and Birmingham New Road at around 8.45pm on Thursday.

A 23-month-old boy and his older brother were pronounced dead at the scene and their mother was taken to hospital with serious injuries.

West Midlands Police said in a statement giving details of the crash: “Officers were called after an Audi S3 struck a BMW containing two children and their mother.

“The driver of the Audi left the scene. A 31-year-old man from a third car, a Bentley, was arrested at the scene on suspicion of causing death by dangerous driving. He remains in police custody.”

Accident investigators were on the scene overnight, where the blue Audi could be seen with a crumpled front end.

The BMW’s off-side airbags had deployed and the car had come to rest in a row of metal pedestrian barriers at the roadside, while the front of the six-litre Bentley convertible appeared to be undamaged.

A taxi driver told reporters two cars had passed him at a “very, very fast” speed about a mile away from the accident scene.

Tanveer Hussain then pulled up at the crash site and was able to point out the man alleged to have been driving the Bentley to police officers.

Mr Hussain, who has made a statement to police, told reporters the Bentley driver initially left the scene after passers-by helping the victims accused him of racing with the Audi driver.

The 32-year-old said: “The guy in the Bentley left and then came back. I said to him: ‘You are responsible for this.’ He kept pleading to me: ‘It’s not my fault’.

“There were a lot of people saying to him: ‘It’s your fault’, and he was getting agitated.”

Describing how two cars had passed him at speed, Mr Hussain added: “I was further up the road, by McDonald’s, and two cars overtook me. If I am doing 35 to 40, they were doing much more.”

Explaining what happened after he heard a bang and then saw the crash site, Mr Hussain added: “I got out of my car and other lads tended to the children. What I saw was terrible.

“It was too much. The mother was just in shock.”

Eyewitness Dudley Hartley said police quickly cleared the area and moved onlookers away – after immediately realising the severity of the children’s injuries.

Mr Hartley, who went outside to see if he could help at the scene, said: “It was absolutely shocking. To see something of this nature and then to discover there were two fatalities, both children, is shocking.”

Another resident, whose flat overlooks the dual carriageway leading to the accident scene, said the BMW was hit shortly after his son spotted two cars apparently racing towards the junction.

The resident, who asked not to be named, said: “You could see the police officers stopping the traffic were really, really distressed.”