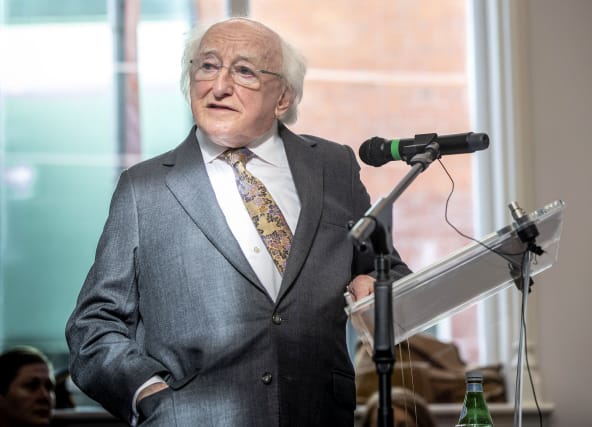 Irish political and religious leaders have condemned the attacks on two mosques in New Zealand.

Forty-nine people have been killed and four people are in custody after shootings took place during Friday prayers at two mosques in the New Zealand city of Christchurch.

The Irish President said the attacks were an attack on democratic values.

Michael D Higgins said: “The attacks on mosques in New Zealand will have appalled people all over the world.

“This attack on innocent lives at spaces of worship for a religious community will be condemned by all those who believe in freedom and democratic values.

“I have conveyed deepest sympathies on behalf of the Irish people to Prime Minister (Jacinda) Ardern and to Governor-General (Patsy) Reddy.”

The New Zealand ambassador to the EU and Nato spoke emotionally in Dublin, and said his home country is reeling from the “dreadful” events.

At an Irish Farmers Journal conference, David Taylor said: “Our prime minister described this as one of our darkest days and she condemned in the strongest possible terms what’s happened.

“New Zealand is reeling from this. But, as the prime minister said, New Zealand represents diversity, kindness, compassion.

“We’re a home for those who share our values and a place of refuge for those in need – I’m getting choked up – and that will not change. We will stay as strong as we have been and will continue and go forward from here.”

Deputy leader Simon Coveney said there can be no justification for the attacks, and that Ireland’s heart was broken for the people of New Zealand.

“I unreservedly condemn the terrorist attacks which took place in Christchurch, New Zealand today. There can be no justification for acts of violence and discrimination based on religion or beliefs,” he said.

“On behalf of the Government, I extend my deepest sympathies and condolences to the families and friends of those injured and killed. ”

“The attack at two mosques in Christchurch, which have left scores of people dead and injured are horrific and to be condemned,” she said.

“I have watched with shock and horror as the scale of this terrible atrocity became known.

“I have been in contact with New Zealand’s Ambassador to Ireland Brad Burgess to convey our condolences and solidarity at this time.”

Brendan Howlin, leader of the Labour Party, sent solidarity to the Muslim community in New Zealand and noted the similarities between the two countries.

“On behalf of the Labour Party in Ireland and, I know, on behalf of the vast majority of people of Ireland, I want to add my words of solidarity to the people of New Zealand, especially members of its Muslim communities,” he said.

“We utterly condemn the appalling terrorist atrocity perpetrated by individuals whose only motivation appears to be blind hate.

“Ireland is like New Zealand in many ways. We have a similar size of population and we are a peaceful country with a similarly low level of violence or gun crime. Of course, we bear the scars of the conflict in Northern Ireland, but despite that history, modern society on this island is resolutely against violence.”

The Bishop of Elphin, Kevin Doran, asked that people pray this weekend for the victims.

“All of us, of whatever religious tradition, can identify with what that might mean for a congregation gathered for worship,” he said.

“Responsibility for these attacks clearly rests with some violent individuals. At another level, however, there are serious questions to be answered, including in our own society, by those who unjustly blame the entire Muslim community for the extremism of some.

A male in his late 20s has been charged with murder and is due to appear at a Christchurch court on Saturday morning.

The country’s prime minister Jacinda Ardern has called it “one of New Zealand’s darkest days”.