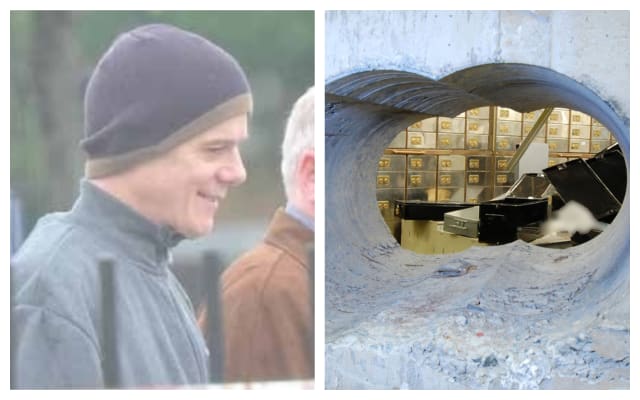 The Hatton Garden ringleader known as “Basil” has been jailed for 10 years – four years after carrying out the £14 million heist.

Alarm specialist Michael Seed, 58, is believed to have let himself in to the building in London’s diamond district using a set of keys before defeating the security system.

He was one of two men who climbed into the vault to loot 73 safe deposit boxes after the gang of ageing criminals drilled through the thick concrete wall over the 2015 Easter bank holiday weekend.

Seed – who pays no taxes, claims no benefits and rarely uses a bank account – evaded capture for three years before police raided his flat, in Islington, north London – around two miles away from Hatton Garden – on March 27 last year.

After being convicted and sentenced at Woolwich Crown Court on Friday, Judge Christopher Kinch QC told him: “Your role was a central one. You were at the heart of the core activities that had to be carried out.

“You were not just there to fetch and carry. In my judgement this must rank among the worst offences of its type.”

Seed, wearing a light blue jumper, glasses, and with thinning grey hair, appeared expressionless as he was jailed.

The electronics expert confidently told a jury at Woolwich Crown Court he was not the man nicknamed “Basil” by the rest of the gang.

But he became the tenth person convicted in connection with the crime when was found guilty of conspiracy to burgle the Hatton Garden Safe Deposit company and conspiracy to handle the proceeds after £143,000 worth of gold ingots, gems and jewellery was found in his bedroom.

Seed was cleared of conspiracy to burgle the high-end Chatila jewellery store in Bond Street over the late August bank holiday weekend in 2010 with members of the same gang.

Prosecutors had alleged he posed as a BT engineer to tamper with the security system before the burglary, then used a 2G mobile phone jammer to block the alarm signal.

The jury of six men and six women deliberated for 35 hours and 35 minutes before returning their verdicts.

Well-spoken Seed, who grew up in Cambridge, was jailed for 10 years for the Hatton Garden charge and eight years for the conspiracy to convert or transfer criminal property charge, to be served concurrently.

Collins and Reader are already out of prison but face going back to jail if they fail to pay back more than £6.5 million of the proceeds police believe could still be under their control.

Detectives believe the gang could have been operating undetected for decades before they were caught, but cannot link them to any other crimes.

Seed travelled abroad three times after he was first photographed meeting Collins by a surveillance team in the weeks after the Hatton Garden burglary, while unknown to police.

Prosecutor Philip Evans QC suggested Seed, who studied electronics and physics at Nottingham University, may have taken stolen cash to Portugal, where Perkins had a holiday flat on the Algarve.

Seed was identified by the Flying Squad at the end of November 2015 and further surveillance footage captured him walking around Canary Wharf in April 2016.

But detectives waited until until March last year to strike, catching Seed red-handed with more than a 1,000 items stolen in the Hatton Garden heist.

He is believed to have been melting down gold and breaking up jewellery on his bedroom workbench bit by bit as it was brought in from a bigger stash.

Gait expert Dr Gordon Burrow compared covert footage of Seed with CCTV images of Basil, disguised in a ginger wig, facemask and hat as he carried a black bin bag to and from the scene to obscure his face from the cameras.

The podiatrist told jurors the “unusual” limp offered “strong support” for the prosecution case that Seed was Basil.

Prosecutors said electronic equipment, including an alarm panel and a mobile jammer, found in his flat was used for training, and suggested he may have worn BT clothing to gain access to the buildings prior to the crimes.

Philip Evans QC said: “These two offences in particular required very specialist skills and knowledge to defeat the alarms and security measures in the premises.

“The prosecution suggest that Mr Seed is one of those people and had the requisite level of skill and knowledge to assist in the successful execution of these crimes.”

Seed claimed he could have been on a family holiday in Cornwall or visiting his elderly mother, in Cambridge, at the time of the Hatton Garden burglary and told jurors he had never been known as Basil.

“Everybody calls me Basil now,” he said