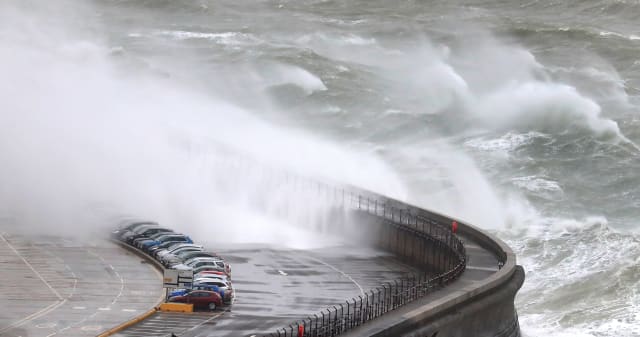 The UK is to be battered by strong winds, rain and snow as an area of developing low pressure sweeps across the country.

The Met Office has issued five weather warnings covering large swathes of the UK ahead of an unsettled weekend.

A developing area of low pressure will move north east across the country, bringing gusts of up to 65mph and “quite persistent rain” which could lead to flooding.

It follows a gusty Friday, with a weather warning for wind in place for the north east of England and the East Midlands.

Forecaster Matthew Box said: “We have a developing low pressure that’s going to pass across the northern half of the UK and it’s going to bring some disruptive weather as it does so.

“That weather will be a mixture essentially of rain, sleet and hill snow for a time, and also some strong winds.”

From midnight on Friday through the whole of Saturday, two warnings are in place for “heavy persistent rain” forecast in parts of Wales, and northern England.

The Met Office is warning that some homes and businesses may flood, with more than 100mm predicted to fall on higher ground in north Wales and 40-70mm elsewhere.

Mr Box said: “Given that some of that ground is already saturated, and has had quite a lot rainfall recently, this spell of further persistent rain is cause for a little bit of concern and we could see some localised flooding.”

In Northern Ireland, a weather warning for snow and rain will be in place until 1pm on Saturday.

Up to 2-4cm of snow could fall over northern hills, clearing by midday, while 20-30mm of rain elsewhere may bring flooding.

In Scotland and northern England, from 4am to 9pm on Saturday a warning is in place for potentially “disruptive snow”.

Up to 10cm could fall on the highest land in Scotland, with 2-6cm in areas above 200-300mm and a “complex mix” of rain and snow at lower levels.

In addition, a warning for wind is in place for Wales, southern England, the West Midlands and north west England.

From 4am to 9pm on Saturday, gusts of 45-55mph are expected widely, with gusts up to 60-65mph possible in exposed coastal areas.

Coastal routes could be affected by large waves, while difficult driving conditions are possible and delays to public transport likely.

Mr Box said: “Obviously we’ve got a lot of travel for some of the big rugby games tomorrow so people should take extra care and plan ahead.”

The pressure will build into next week, with conditions turning drier, brighter and calmer.