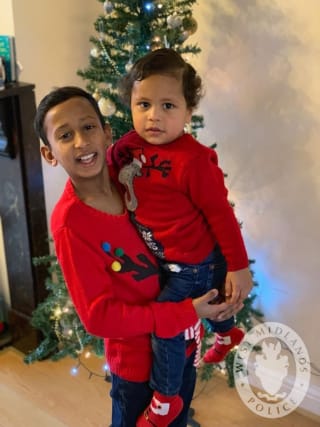 The family of two young children killed when their mother’s BMW was hit by another car have urged the public to help track down a driver who fled the scene.

Police have identified the brothers, who died at the scene in Wolverhampton on Thursday night, as 23-month-old Pawanveer Singh and 10-year-old Sanjay Singh.

A 31-year-old man alleged to have been at the wheel of a six-litre Bentley Continental convertible was arrested at the scene on suspicion of causing death by dangerous driving but has since been released pending further inquiries.

But the driver of an Audi car – which witnesses claim was “racing” alongside the Bentley – made off and has yet to be traced.

In a statement released through West Midlands Police, relatives of Sanjay and Pawanveer said: “Our family are grieving over the tragic deaths of our two beautiful children, as well as dealing with the shock of the horrific crash.

“We appeal to the general public to come forward as witnesses in order help police find the perpetrator who fled from the scene and to bring him or her to justice.

“At this time we would appreciate some privacy and space to grieve over our precious loss.”

Detective Sergeant Paul Hughes, from the West Midlands Police Serious Collision Investigation Unit, said: “Our thoughts remain with the family of Sanjay and Pawanveer Singh at this extremely difficult time.

“We have already had a huge response from the public but would urge anyone who has not yet spoken to us to get in touch.

“I would appeal directly to the driver of the Audi to make contact with us. You may not be fully aware of the full tragic circumstances but you now need to speak to us.

“I would also ask the public who have any information regarding the driver or recall seeing a blue Audi S3 and a white Bentley Continental convertible travelling along the Birmingham New Road to make contact.”

Witnesses claim the Bentley initially left the accident scene – at traffic lights on a dual carriageway – after its driver was accused by witnesses of racing with the Audi.

Accident investigators were on the scene overnight, where the blue Audi could be seen with a crumpled front end.

The BMW came to rest in a row of metal pedestrian barriers at the roadside, while the front of the Bentley appeared to be undamaged.

Taxi driver Tanveer Hussain told reporters two cars had passed him at a “very, very fast” speed about a mile away from the accident scene.

Explaining what happened after he heard a bang and then saw the crash site, Mr Hussain added: “I got out of my car and other lads tended to the children. What I saw was terrible.

“It was too much. The mother was just in shock.”

Another resident, whose flat overlooks the Birmingham New Road, said the BMW was hit shortly after his son spotted two cars apparently racing towards the junction.

The resident, who asked not to be named, said: “You could see the police officers stopping the traffic were really, really distressed.”

Anyone with information is urged to contact police via Live Chat at west-midlands.police.uk between 8am and midnight, or call 101 anytime. Crimestoppers can be called anonymously on 0800 555 111.