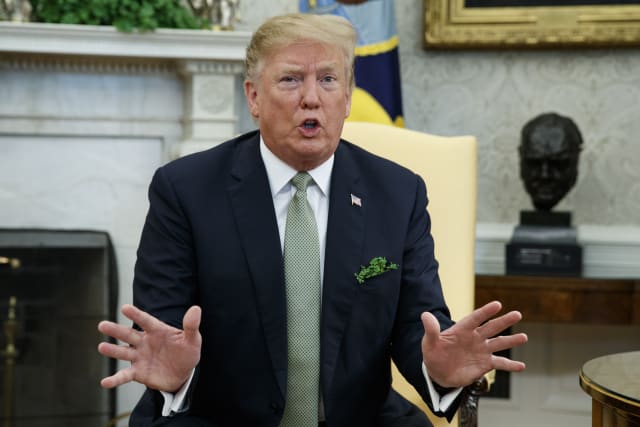 Donald Trump has been urged to denounce white supremacists after a far-right terrorist who killed 49 people in New Zealand cited his support for the US President.

Australian gunman Brenton Tarrant described Mr Trump as “a symbol of renewed white identity and common purpose” in a 74-page document posted online shortly before the attack on mosques on Friday.

TV presenter Piers Morgan, who has previously referred to the president as a friend, implored Mr Trump to speak out.

He tweeted: “This is the time, Mr President @realDonaldTrump. You must now denounce all white supremacists without equivocation. They are using your name to justify their racist barbarism.

“You got it wrong after Charlottesville, please get it right today. The world is watching & waiting.”

Mr Trump was criticised for saying there was “blame on both sides” after clashes in Charlottesville, Virginia, where a white nationalist demonstrator drove into a crowd of counter-protesters, killing one and injuring many more.

The US president sent a tweet on Friday offering “warmest sympathy and best wishes to the people of New Zealand” and described the incident as a “horrible massacre” in which people “senselessly died”.

“The U.S. stands by New Zealand for anything we can do. God bless all!” he added.

But 20 minutes later he was tweeting about Jewish people allegedly leaving the Democrat Party and sharing claims Barack Obama had conspired with US authorities against him.

Fewer than two hours later he sent a string of tweets railing against the Mueller investigation and allegations of collusion between his election campaign and Russian agents.

“Typically in the past, when you’ve seen a terrorist attack or a tragedy on this scale, what you see world leaders doing is putting out statements of condolence and then giving them some time to breathe,” said Matt Gertz, a senior fellow at progressive non-profit organisation Media Matters For America, which monitors Mr Trump’s Twitter activity.

“Trump doesn’t do that. He moves immediately back into his typical patterns.”

His “typical patterns” on a weekday morning, said Mr Gertz, involve watching the TV panel show Fox and Friends and tweeting about the subject matter.

“His routine does not break,” he said.

“No matter what is going on in the world he is going to move on immediately to what he does, and he spends his morning live tweeting.”

Mr Gertz also said the US president’s reaction to such attacks will differ depending on whether he can use the tragedy to support his own political objectives.

“This is different because it’s not useful for him,” he said.

“This is a massacre of Muslims by reportedly a white supremacist.

“This isn’t something he can use to bolster his political platform in a way that he can take a Christmas market bombing and turn it into his core message of ‘we need to keep out immigrants, we need to prevent them getting into the country’.”

In December 2018, a gunman – French national and convicted criminal Cherif Chekatt – killed three and injured 12 by shooting into a Christmas market in Strasbourg.

After the attack, Mr Trump responded: “Another very bad terror attack in France. We are going to strengthen our borders even more. Chuck and Nancy must give us the votes to get additional Border Security!”

Similarly, after an Uzbek immigrant drove a truck into pedestrians in New York City in October 2017, he tweeted: “In NYC, looks like another attack by a very sick and deranged person. Law enforcement is following this closely. NOT IN THE U.S.A.!”

He continued to tweet about security, immigration and “extreme vetting” in the following days.

“If he can create the sense of fear and if it’s in his worldview he’ll just run with it,” Mr Gertz claimed.

“Straight for the fear-mongering is often the direction that he moves.”