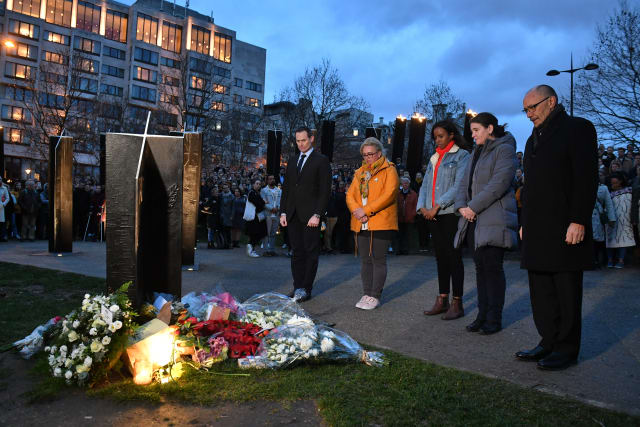 Hundreds of mourners stood in a silence in honour of those who were killed in the New Zealand shootings.

Flowers and candles were laid as night fell on the peaceful gathering at the New Zealand memorial in central London’s Hyde Park.

Ms Sofi, a corporate accountant of Brixton, south London, said: “I am a British Muslim and I wanted to make sure that people come together.

“It is a very important time to bring people together and not to try and divide.

“Bringing people together is how you deal with terrorism. In this sensitive time and in our society, it is important that we all know we are human beings first.”

The event was aimed at showing solidarity and to provide comfort after the horror of the Christchurch shootings in which at least 49 people were killed at two New Zealand mosques.

A minute’s-silence and traditional Moari music were part of the moments of reflection.

Hundreds of people, of nationalities including British-based New Zealanders, attended and stood in respectful silence.

New Zealand couple Blair Godby, 25, originally of Invercargill, and Amy Louise Mill, 24, originally of Nelson, both said that waking up to hear that terror had struck their homeland was a “shock”.

“New Zealand is very small, and now so far away.

“I have always taken such pride in these sorts of things not happening.

“Coming here and knowing that we are around New Zealanders brings a feeling that we are together and can send some if that support back to the communities at home.”

Ms Mill, who said she had always felt New Zealand was “a safe haven”, added: “Being here makes you feel a little connected to you community in a way.

“It is a little thing we can do to help acknowledge the 49 people who were murdered and the communities who are mourning them.”