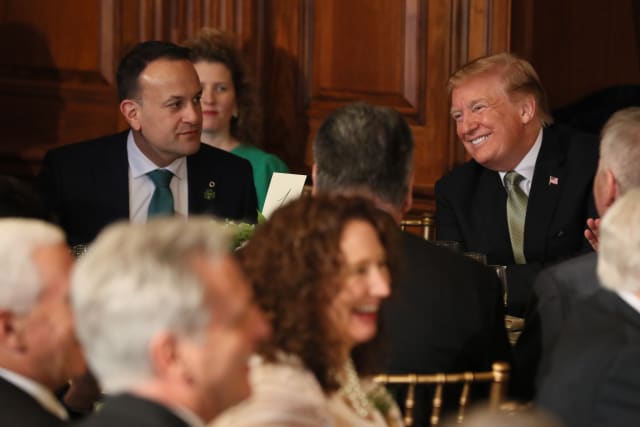 The United States and Ireland are bound together with ties of kinship and friendship, US president Donald Trump has said.

Mr Trump described the relationship between the two countries as “strong and resilient” during an event in Washington DC attended by Irish and Northern Ireland politicians.

During the Speaker’s Lunch at the Capitol Building, Mr Trump also reassured Irish premier Leo Varadkar on the ongoing Brexit debate saying “it will all work out”.

The annual lunch was hosted by House of Representatives Speaker Nancy Pelosi on Capitol Hill and included a number of Irish political representatives as well as Garda Commissioner Drew Harris.

Speaking about his earlier private meeting with Mr Varadkar, the US president said: “We discussed a lot of things, in particular we talked about Brexit, something that turned out to be a little more complex than they thought it be.

“But it will all work out, everything does, one way or the other.

“You’ve got a very interesting view on it, and I appreciate you letting me know what’s going on over there.

He added: “The United States and Ireland are bound together with ties of both kinship and friendship, a really great friendship.

Mr Varadkar thanked the Friends of Ireland caucus in Congress for the “vital help” in protecting the Good Friday Agreement.

The organisation was founded by Irish-American politicians to support peace and reconciliation in Northern Ireland.

Mr Varadkar added: “The Irish people have always had a dialogue with the American people. It is genuine, it is warm, and it has stood the test of time.

“Your political and civic leaders – of all parties and backgrounds – helped shape the country that Ireland is today.

“And I want to say on behalf of the Irish government and behalf of the Irish people, that we thank the Friends of Ireland caucus in Congress for their vital help at this critical time to protect the provisions of the Good Friday Agreement and ensure there is no return to a hard border on the island of Ireland, whatever happens with Brexit.

“Madam Speaker, President Reagan once said that ‘a people free to choose will always choose peace’. He was right, and I know the land of liberty will continue to protect that fundamental freedom.”

“This has been a tradition where we dispense from our differences, whether it is political or whether they are competitive in any other way, and where we come together and celebrate,” she said.

“Here in America we take great pride in Irish heritage that millions in our country claim.

“As we celebrate our common heritage we also look to the future and work to continue peace in Northern Ireland.”