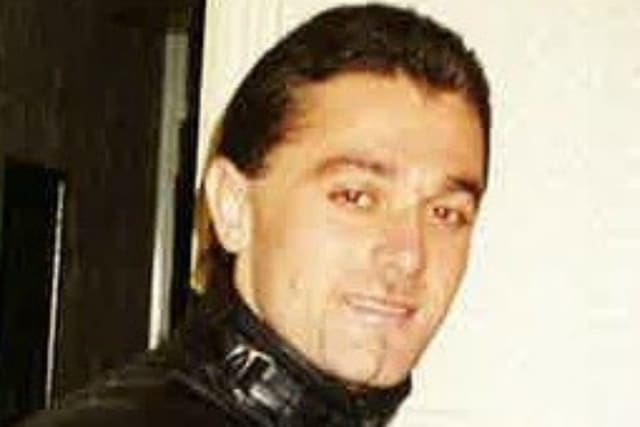 A stonemason accused of beating and stabbing his friend to death is a convicted killer responsible for the deaths of four other men in Europe, jurors have heard.

Mane Driza, 41, who was known as Scarface film character Tony Montana, is on trial at the Old Bailey accused of murdering fellow Albanian Stefan Bledar Mone, 23, in June 1999.

He allegedly launched a “brutal and merciless” attack on Mr Mone at his London home after accusing him of stealing his wedding ring.

Afterwards, he fled to Italy where police tracked him down in Sicily the following year, the Old Bailey has heard.

It emerged at his trial that Driza had killed two men in his home country of Albania two years before Mr Mone’s death, and went on to shoot two others dead in Italy afterwards.

In Albania, Driza was convicted with his father of two charges of “premeditated murder in complicity of citizens” in December 2001.

Lavdosh Kannani had been sentenced to six years in jail for an offence against the defendant.

But in March 1997 he returned to the village of Bishan after prisons were opened during turmoil in Albania.

On April 11 1997 the defendants, in co-operation with his father, shot and killed him.

As they returned home, they met Elmaz Kannani and shot him dead too, jurors were told.

Following the killings, the defendant came to Britain where he allegedly attacked Mr Mone in his Wembley flat.

He allegedly inflicted more than 120 injuries with a lock knife and pick axe handle, cutting Mr Mone’s throat with a curved cheese knife, the court was told.

Mr Mone’s pregnant girlfriend found the body the next day but was only able to identify him by his belt buckle, jurors have heard.

By then Driza had taken a flight to Italy, where he went on to kill two more men and attempt to kill a third.

In Catania, Sicily, in June 2002, he was convicted of conspiracy to murder Maskaj Artan and Blushaj Albert, and the attempted murder of Maskaj Lefter.

The Italian court found that, as part of a plan, the defendant went with others to a bar in Catania carrying two firearms on December 20 1999.

He shot dead the two men and tried to kill a third, but the gun jammed, the court heard.

He was arrested the next day and has remained in prison until he was brought to Britain by UK police on May 31 last year.

On his arrival he was arrested and charged with the murder of Mr Mone.

The court was told Driza had been tried in his absence in Albania but accepts he did shoot the men in both countries.

Driza, also known as Sokol Drenova,  of no fixed abode, has denied the murder of Mr Mone.