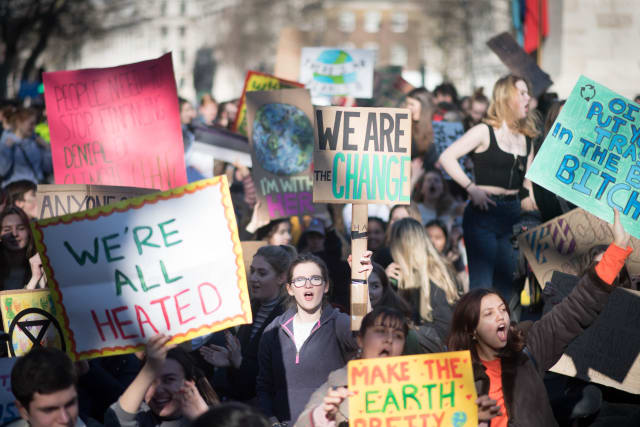 The UK public supports students walking out of the classroom to call for more climate action, a poll suggests ahead of a global youth strike on the issue.

More than half (53%) of those quizzed by Opinium for the Conservative Environment Network supported youngsters leaving lessons to demonstrate, while just 15% opposing the move.

There is also significant public support for cutting the UK’s greenhouse gas emissions to zero as soon as possible, it suggests.

The survey’s findings comes as organisers of the Youth Strike 4 Climate say events will take place in more than 100 towns and cities from Penzance to Aberdeen on Friday, in the second walkout for climate action in the UK.

The strikes are driven by what students say is “an alarming lack of government leadership on climate action”.

They are part of a global day of action in more than 100 countries.

They have been inspired by teenager Greta Thunberg, who protests every Friday outside Sweden’s parliament to urge leaders to tackle climate change.

Organisers here say they expect attendances to be larger than the first UK strike on February 15, which saw thousands of students defy headteachers and politicians to ditch lessons for demonstrations.

The poll suggests they have the majority of the public on their side, and young people are even more supportive of the walkout, with 60% of 18 to 34-year-olds backing the move.

Half of the 2,000 UK adults quizzed said the Government is not doing enough to stop climate change.

And 70% think it is important the Government reduces greenhouse gas emissions to zero as soon as possible.

That includes cutting global carbon dioxide emissions by almost half within 12
years, and to zero by mid-century.

While recognising the importance of climate change in response to the first UK strike, Downing Street said the disruption increased teachers’ workloads and wasted lesson time and Education Secretary Damian Hinds said missing class was not the answer.

Conservative MPs have lined up to praise the “inspirational strikers” ahead of the latest action.

In the video released ahead of Friday’s strikes, Environment Secretary Michael Gove tells the students walking out of lessons and lectures to call for urgent action on cutting emissions: “Dear school climate strikers, we agree”.

“Collective action of the kind you’re championing can make a difference, and a profound one,” he says.

“But that change is absolutely necessary,” he says in the new video, published via the Conservative Environment Network.

Energy and Clean Growth Minister Claire Perry says: “This Government has committed to setting a net zero emissions target, so that we are no longer adding harmful emissions to the climate.

“Together, we can stop climate change.”

Richard Benyon, MP for Newbury said: “The extraordinary passion of the school strikers is inspirational.

“These are young people whose lives will be much more affected by climate change than the generations leaving them this legacy.”

Zac Goldsmith, MP for Richmond Park, said: “Heat records are being made, ecosystems are undergoing extraordinarily rapid changes, lands are becoming harder to farm, and the spectre of a global refugee crisis is looming.”

He also said the IPCC report showed that the difference in curbing emissions to 1.5C rather than 2C “is dramatic”.

“In this light, it seems absurd and mean-minded to admonish children for missing school to ring the alarm bells,” he added.

Simon Clarke, MP for Middlesbrough South and East Cleveland, said he had led the charge in Parliament for the UK to reach net zero emissions before 2050 and had gained cross-party support for the move.

“This polling shows that a net zero target is not just necessary but hugely popular, and not just within Parliament – over 70% of British people support us in our argument.”

Labour leader Jeremy Corbyn has also backed the strikers, tweeting: “Thank you for standing up against climate change. You shouldn’t have to pay the price for the mistakes of previous generations.”