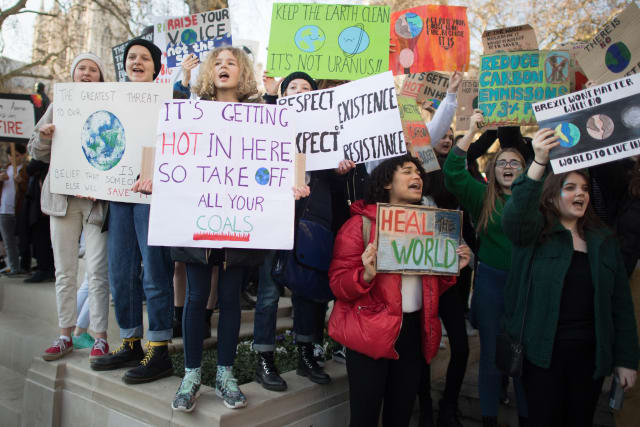 Ministers and MPs have issued a video supporting young people staging school strikes as part of a global day of youth action on climate change.

In the video released ahead of Friday’s strikes, Environment Secretary Michael Gove tells the students walking out of lessons and lectures to call for urgent action on cutting emissions: “Dear school climate strikers, we agree.”

“Collective action of the kind you’re championing can make a difference, and a profound one,” he says.

Organisers of the Youth Strike 4 Climate say events will take place in more than 100 towns and cities from Penzance to Aberdeen on Friday, in the second walkout for climate action in the UK.

Driven by what students say is “an alarming lack of government
leadership on climate action”, the strikes are part of a global day of walkouts and demonstrations by young people in more than 100 countries.

They have been inspired by teenager Greta Thunberg, who protests every Friday outside Sweden’s parliament to urge leaders to tackle climate change.

Organisers here say they expect attendances to be larger than the first UK strike on February 15, which saw thousands of students defy headteachers and politicians to ditch lessons for demonstrations.

Some politicians and school leaders criticised young people for taking part in the education strike on February 15, but their action was backed by other MPs, academics and environmental campaigners.

“But that change is absolutely necessary,” he says in the new video, published via the Conservative Environment Network.

Elsewhere in the video Tory MPs highlight action the Government is taking on climate change, but acknowledge more needs to be done.

Energy and Clean Growth Minister Claire Perry says: “This Government has committed to setting a net zero emissions target, so that we are no longer adding harmful emissions to the climate.

“Together, we can stop climate change.”

Other political leaders have also backed the climate strikers.

In a tweet Labour leader Jeremy Corbyn said: “Thank you for standing up against climate change.

“You shouldn’t have to pay the price for the mistakes of previous generations.

“I’d be delighted to meet you, hear your message and to discuss how we can work together to protect our planet.”