Could royal baby be a Gertrude or a Marmaduke? 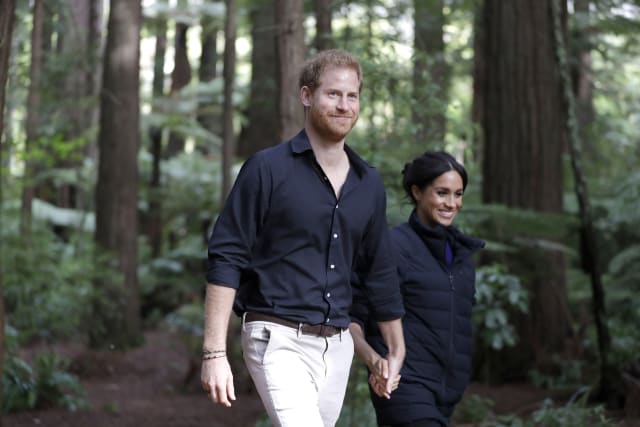 Gertrude, Marmaduke, Ursula and Hyacinthe could be among the potential names for the Duke and Duchess of Sussex’s baby if the couple take inspiration from their family tree.

Research into Harry and Meghan’s lineage by ancestry.co.uk found that Mary, John and Elizabeth were the most common names on both sides.

But there were some more unusual choices for the royal couple to ponder if they want to pay tribute to their heritages.

Her great-great-grandmother Gertrude Sadler, who was born in Georgia in 1882 and died in 1958, was a charitable pillar of her community and involved with the Good Samaritan Aid Society.

Gertrude M Merril, who was born in 1887 and died in 1938, is the Gertrude on the side of Meghan’s father Thomas Markle, according to the research.

Diana remains one of the favourites for a girl at the bookmakers in tribute to Harry’s late mother Diana, Princess of Wales.

Mr James said Harry’s distant relatives include a number of Lancelots, a Boniface, a Marmaduke and a Hyacinthe, while Meghan has several Ralphs and an Ursula.

The historian said: “When delving into someone’s family tree, you never know what you’re going to find, so it’s always interesting to uncover names that may have been forgotten or would now be considered quite uncommon.

“The royal family have often been associated with traditional names such as George, Henry or Victoria, but with Meghan’s ancestry revealing names such as Ralph and Gertrude, predicting the name of the next royal baby remains a guessing game.”

The royal baby is due at the end of April or early May, with Meghan already having carried out her final official, public engagement ahead of her due date when she attended the Commonwealth Day service on Monday.

The baby will be seventh in line to the throne and the Queen’s eighth great-grandchild.