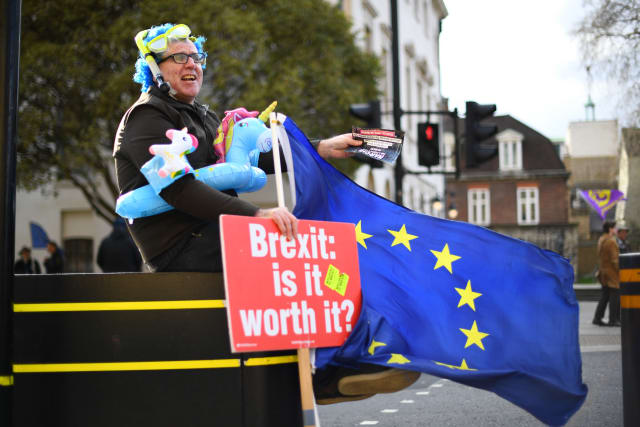 Brexit developments continued to dominate the markets on Thursday, as the pound faltered but London’s top shares gained ground.

David Madden, market analyst at CMC Markets UK, said: “Stock markets are largely higher this afternoon as MPs made it clear yesterday they are not in favour of a no-deal Brexit.

“Traders understand what UK lawmakers don’t want, but they are still unclear as to that they do want. Westminster will remain in focus today as MPs are set to vote on whether article 50 should be extended or not.”

MPs defeated an amendment proposing a second referendum shortly after the market closed on Thursday.

Ahead of Thursday night’s votes, the pound was trading lower. Fiona Cincotta, senior analyst at City Index, said the decline was partly due to Labour’s decision not to back a second referendum amendment.

Oil prices touched their highest level this year earlier in the day, but gains dwindled after Opec suggested further output cuts may be needed.

In London, shares in Debenhams were up 0.04p, or 1.37%, to 3.254p after the beleaguered retailer said it will give “careful consideration” to a £150 million loan proposal from Mike Ashley’s Sports Direct.

Its response followed Sports Direct’s confirmation late on Wednesday that it had made an offer of a loan to Debenhams as part of an arrangement which would install Mr Ashley as chief executive of the company.

OneSavings Bank shares were down 1.2p to 396p and Charter Court Financial Services Group closed down 3p at 322p, following the announcement that the two lenders will embark on a £1.6 billion merger.

Cineworld unveiled profits which had more than doubled after film-goers flocked to watch Black Panther and Avengers: Infinity War.

Superdry shares were 16.5p higher at 532p after management reiterated its advice that shareholders vote against co-founder Julian Dunkerton’s return to the board.

Mr Dunkerton said in a circular on Thursday that the retailer’s current management, led by chief executive Euan Sutherland, has presided over a “catastrophic decline”. But Superdry said it had already addressed these concerns.

DFS warned of a “challenging” year ahead, as the furniture group braces for the potential impact of Brexit. But the sofa retailer reported strong like-for-like sales growth of 6.6% in the first half.