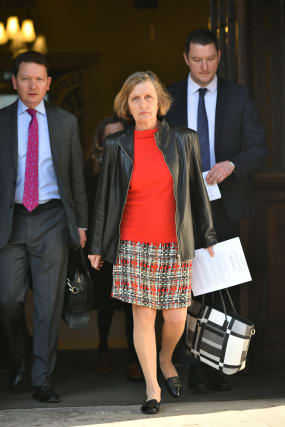 The Irish Government has reiterated its call for a public inquiry to be held into the murder of Belfast solicitor Pat Finucane.

He was shot dead in front of his family in February 1989 by loyalists in an attack found to have involved collusion with the state.

Mr Finucane’s widow Geraldine claimed the UK Government had unlawfully “reneged” on a promise to hold a public inquiry into the killing – one of the most notorious of the Troubles – when former prime minister David Cameron instead ordered an independent review.

The Supreme Court in London ruled last month there has been no “effective investigation” into Mr Finucane’s murder and previous inquiries did not comply with the Finucane family’s human rights.

Irish Foreign Affairs Minister Simon Coveney announced on Wednesday that the Council of Europe Committee of Ministers in Strasbourg will examine a number of cases related to dealing with the legacy of the Troubles, including the murder of Mr Finucane.

Addressing a meeting of the committee on Wednesday, Irish Ambassador Keith McBean urged the United Kingdom to open a public inquiry into the case.

“Ireland would reiterate to the Committee of Ministers that it remains our firm view that a satisfactory outcome to the Finucane case can only be achieved through a public inquiry and we call again on the UK Government to fulfil the commitment it made in this respect under the Weston Park Agreement of 2001,” the ambassador said.

Mr McBean also referred to Bloody Sunday, the day before Northern Ireland’s Public Prosecution Service (PPS) will announce whether it will prosecute 17 ex-soldiers and two former members of the Official IRA.

Some 13 civilians were shot dead when soldiers opened fire following a civil rights march in Londonderry on January 30 1972.

“The Bloody Sunday families, and the families of other victims, have campaigned for truth and justice for decades and are not served by the unclear signals from the UK Government about their intentions,” the ambassador said.

“Where crimes are committed, they must be investigated and prosecuted as necessary in accordance with the law and regardless of the perpetrator.”

Ireland has also expressed “deep concern” generally at the lack of progress in Northern Ireland on tackling its troubled past.

It has been without devolved government for more than two years following a break down in relations between the Democratic Unionists and Sinn Fein.

A number of mechanisms aimed at addressing legacy issues that were negotiated in the Stormont House Agreement in 2014 have not yet been delivered amid the political vacuum.

These include the Historical Investigations Unit, an independent body in Northern Ireland tasked with investigating outstanding deaths connected to the Troubles.

The Irish ambassador urged the UK to take action, adding:  “A move ahead to legislation is now urgently required by the UK Government.”