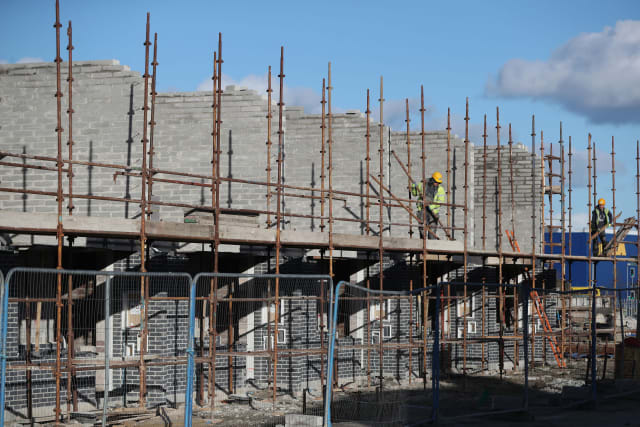 Measures to boost the supply of affordable homes have been welcomed, but experts said they have “heard it all before” and the property market needs an end to Brexit uncertainty.

There were also calls for more initiatives to help the private rental sector and to ease stamp duty costs to make it easier for people to move.

The Government will guarantee up to £3 billion of borrowing by housing associations in England to support delivery of around 30,000 affordable homes, as part of wider efforts to boost the supply of properties.

Some £717 million will be allocated from the Housing Infrastructure Fund to support up to 37,000 new homes at sites including Old Oak Common in London, the Oxford-Cambridge Arc and Cheshire.

Polly Neate, chief executive of Shelter, said: “It has to be noted that we can’t deliver social housing on the scale we need on borrowing alone.”

She said 3.1 million social homes are needed in the next 20 years “to tackle the housing crisis at its root and lift thousands of families out of homelessness”.

The measures unveiled in the Spring Statement follow on from the autumn Budget in 2017, when a package of new policies was set out to raise housing supply by the end of this parliament to its highest level since 1970, aiming to reach around 300,000 a year.

A stamp duty cut for first-time buyers and various initiatives under the Help to Buy scheme are among measures previously been introduced to boost the market.

Hew Edgar, head of policy at the Royal Institution of Chartered Surveyors (Rics), said: “We’re encouraged to see that housing associations in England will be able to borrow up to £3 billion to deliver 30,000 affordable homes, however if added to the 220,000 new homes last year, this does not reach the Government-set target of 300,000 new homes per year.

“We continue our call on the Government to prioritise housing and address the shortages which pose real long-term problems.”

He said: “It’s time that housing experts were brought into the process of developing a strategic housebuilding plan – one that can’t be with tinkered with for the purpose of gaining votes every time a general election is on the horizon.”

Jeremy Leaf, a north London estate agent and a former residential chairman of Rics, said: “Anything which improves the supply of affordable housing is to be welcomed but we have heard it all before.”

Mr Leaf said he was disappointed about a lack of announcements around the private rental sector “because the various measures compromising landlords’ finances introduced over the past few years has led to many, particularly accidental landlords, selling up, at a time when people are renting for longer and buying their first home later”.

He continued: “First-time buyer numbers may have increased to a 12-year high but even those taking advantage of Government schemes such as Help to Buy or stamp duty exemptions are struggling to raise deposits and take those important first steps on the ladder.”

Mark Manning, managing director of Leeds-based estate agent Manning Stainton, said “like everyone”, he wanted to see an end to uncertainty over Brexit.

He said: “The housing market is currently in good shape, particularly in the North, but it won’t remain that way for much longer if this political uncertainty continues.”

Nick Leeming, chairman of Jackson-Stops, said: “Amid all of our current political ups and downs, the property industry and home movers across the country were once again hoping for some relief in the form of cuts to stamp duty rates on properties in the middle to top end of the market.

“And once again, we have had no such luck.”

Paul Smith, chief executive of haart estate agents, said the speech was “a recital of past announcements”.

He said: “Millions of older home owners are locked out of moving, unable to downsize due to the arbitrary unaffordability of stamp duty.

“While at the same time, families are stuck in homes too small due to the lack of available homes to move into.

“The rungs on our housing ladder are broken, and the Government must address and reform our system so it is fit for purpose.”