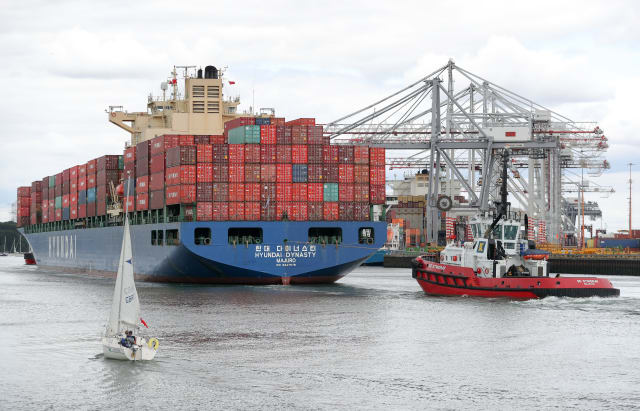 A new tariff regime on EU products in the case of a no-deal Brexit will act as a “sledgehammer” to the UK economy, business has warned.

The new levies, to be imposed from the day after a March 29 Brexit if MPs vote for a no-deal withdrawal, would force up prices on EU imports including cars and many food products.

The unilateral and temporary regime includes levies of 10.6% on European cars and trucks which had previously been free of tariffs, potentially increasing the cost of a typical family hatchback by around £1,500. Car parts would face no extra tariffs to avoid disruption to supply chains.

And it introduces tariffs on EU goods like beef, chicken, lamb, pork and Cheddar-style cheese if MPs vote to leave without a deal.

But tariffs will be slashed on imports from outside the EU, potentially lowering prices on goods from countries like the USA and China, in a move which unions warned would “destroy” jobs in manufacturing sectors like steel.

In special arrangements for Northern Ireland, the UK’s temporary import tariffs will not apply to EU goods crossing the border from the Republic.

The decision – designed to avoid the need for checkpoints which might revive sectarian tensions – has raised fears of smuggling, as ministers insist there will not be a border down the Irish Sea.

Although tariffs will be payable on goods passing from the EU to Great Britain via Northern Ireland, customs officers will rely on intelligence and compliance work rather than checks on cargoes to impose the levies.

Ministers said that, overall, the changes would represent a “modest liberalisation” of the UK’s tariff regime.

They said that 87% of all imports to the UK by value would be eligible for zero-tariff access – up from 80% at present – while many other goods will be subject to a lower rate than currently applied under EU rules.

But CBI director-general Carolyn Fairbairn told BBC Radio 4’s Today: “This tells us everything that is wrong with a no-deal scenario.

“What we are hearing is the biggest change in terms of trade this country has faced since the mid-19th century being imposed on this country with no consultation with business, no time to prepare.

“This is no way to run a country.

“What we potentially are going to see is this imposition of new terms of trade at the same time as business is blocked out of its closest trading partner.

“This is a sledgehammer for our economy.”

Adam Marshall, director general of the British Chambers of Commerce (BCC), said the tariffs would create “winners and losers across UK industry overnight” and potentially cost the UK leverage in future trade talks.

“The abruptness of changes to tariff rates in the event of a no-deal exit from the EU would be an unwelcome shock to many of the businesses affected,” said Dr Marshall.

“There has not been enough consultation, preparation or planning to support the firms and communities that could find themselves at the end of a sudden shift in tariffs. As MPs vote tonight, this is yet another reason why they must act to avoid a messy and disorderly exit from the EU on March 29.”

The Unite union’s assistant general secretary for manufacturing, Steve Turner, said: “Theresa May and her Government need to stop the economic vandalism which is threatening jobs and livelihoods by properly taking a no-deal Brexit off the table and securing tariff-free frictionless trade with Europe.

“The UK’s steel industry has been pushed to the brink because of the dumping of cheap Chinese steel, while our tyre industry is fighting for survival in the face of inferior alternatives flooding the market from overseas.

“Reducing tariffs to zero on the majority of imports, including steel, in the event of a no-deal Brexit would destroy jobs and leave UK manufacturers competing with both hands tied behind their backs.”

Among the 13% of imports by value which will be subject to tariffs will be:

– Beef, lamb, pork and poultry and some dairy products, in order to protect UK farmers and producers from cheap imports;

– A number of tariffs on finished vehicles to support the automotive sector, which will not apply to car parts imported from the EU to prevent disruption to supply chains;

– Products including certain ceramics, fertiliser and fuel, where tariffs protect UK producers against unfair practices like dumping and state subsidies;

– Goods including bananas, raw cane sugar and certain kinds of fish, where tariffs are used to permit preferential access to the UK market for developing countries.

If the UK leaves the EU without a deal on March 29, the temporary schedules will apply for up to 12 months while a full consultation and review of a permanent approach is undertaken.

Proposed tariff rates on a range of food products were announced as a proportion of the so-called “most favoured nation” (MFN) currently imposed by the EU on imports from countries which do not have a free trade agreement.

Tariffs on finished cars and trucks will be set at 10.6%, down from the EU MFN rate of 11.3%, while for finished buses the rate will remain unchanged at 12.6%.

Trade Policy Minister George Hollingbery said: “Our priority is securing a deal with the EU as this will avoid disruption to our global trading relationships. However we must prepare for all eventualities.

“If we leave without a deal, we will set the majority of our import tariffs to zero, whilst maintaining tariffs for the most sensitive industries.

“This balanced approach will help to support British jobs and avoid potential price spikes that would hit the poorest households the hardest.

“It represents a modest liberalisation of tariffs and we will be monitoring the economy closely as well as consulting with businesses to decide what our tariffs should be after this transitional period.”