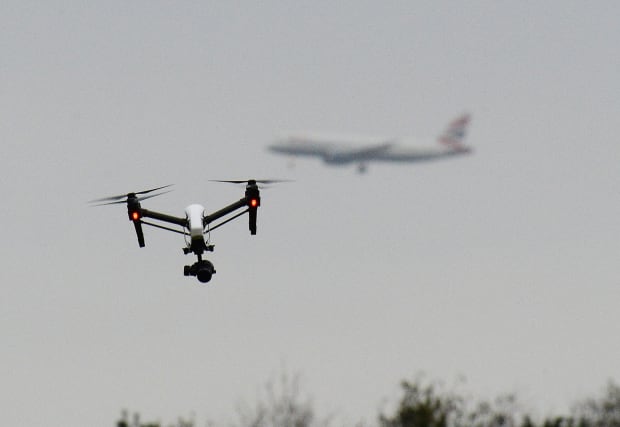 The drone no-fly zone around airports has been extended to protect aircraft.

New legislation banning the gadgets from being flown within 5km (3.1 miles) of airports came into force on Wednesday.

Drone sightings at London Gatwick in December caused around 1,000 flights to be cancelled or diverted over 36 hours, affecting more than 140,000 passengers in the run-up to Christmas.

London Heathrow and Dublin Airports have also been forced to suspend flights due to drone activity in recent weeks.

There were 125 near-misses between drones and aircraft reported in 2018, up 34% on the total of 93 during the previous year.

Just six incidents were recorded in 2014.

Transport Secretary Chris Grayling said: “The UK has been consistently at the forefront of legislation to tackle drone misuse.

“All drone users should be aware that flying a drone within 5km of an airport or over 400ft is a serious criminal act, one which could put lives at risk, and risks penalties ranging from significant fines to a life sentence.”

Anyone caught recklessly or negligently endangering an aircraft with a drone can be handed a prison sentence of up to five years.

The intentional use of a device to commit an act of violence at an airport which could cause death, serious personal injury or endanger safe operations could result in life in prison under the Aviation and Maritime Security Act.

The Civil Aviation Authority’s code of conduct, the Dronecode, sets out existing rules for drone users, including staying below 122m (400ft) and flying at least 50m (164ft) away from buildings and people.

From November 30 the owners of drones which weigh between 250g (9oz) and 20kg (44lb) will be required to register their devices, and drone pilots will have to pass an online competency test.

The Government is drafting a Drones Bill which will help the police catch those misusing the gadgets, including the ability to access data stored on a drone with a warrant, and stop and search powers over drone users near airfields.

Aviation Minister Liz Sugg will meet drone manufacturers next week to discuss how to tackle criminal misuse of their products.

This is expected to cover a range of topics including counter-drone technology and software that could be installed in drones when they are built.

The Home Office is also reviewing the UK’s approach to countering the malicious use of drones and is considering how best to protect critical infrastructure.