The Ethiopian Airlines crash: what we know so far 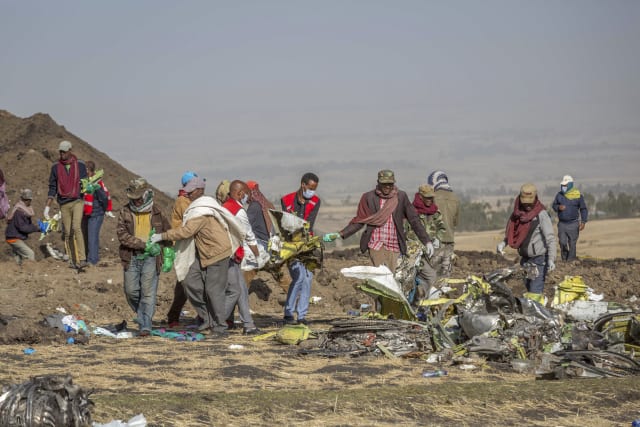 An Ethiopian Airlines jet crashed shortly after taking off from Addis Ababa, killing all 157 people on board, including seven British passengers.

– The Boeing 737 Max 8 crashed around Bishoftu, or Debre Zeit, some 31 miles (50km) south of the Ethiopian capital, shortly after taking off at 8.38am local time on Sunday.

– There were 149 passengers and eight crew on board flight ET302 which was heading for Nairobi, Kenya. There were no survivors.

– The victims comprised more than 35 nationalities, the majority of whom were from Kenya, Canada, Ethiopia, China, Italy, the US, France, the UK, Egypt and Germany.

– Among them were United Nations workers Joanna Toole, 36, from Devon, and father-of-two Michael Ryan, who had lived in Lahinch in Co Clare. Joseph Waithaka, a 55-year-old who lived in Hull for a decade before moving back to his native Kenya, also died in the crash.

– Early indications showed that 19 employees of UN-affiliated organisations were killed, with its environmental forum due to start in Nairobi on Monday.

– The cause of the disaster is yet to be determined; however, it has already had a wider impact on operations of Boeing’s 737 Max 8, one of which was involved in another deadly crash less than five months ago.

– Ethiopian Airlines said it has grounded all of its Max 8 aircraft as an “extra safety precaution”.

– All Chinese airlines have suspended operations involving the Max 8 on the orders of the country’s civil aviation authority.

– Records show that Ethiopian Airlines took delivery of its doomed aircraft as recently as November.

– The plane had flown from Johannesburg to Addis Ababa earlier on Sunday morning, and previously underwent “rigorous” testing on February 4, according to the airline.

– Minutes into the flight the pilot sent out a distress call and was given clearance to return, according to Ethiopian Airlines chief executive Tewolde Gebremariam.

– An eyewitness said there an intense fire when the plane crashed and “everything is burnt down”.