Lucky escape for pedestrian as rubble smashes down on to pavement

A man narrowly avoided being crushed by falling bricks from a collapsing building during the weekend's strong winds.

CCTV footage shows the pedestrian's lucky escape as he walks down Stoke Newington High Street, east London, just seconds before the rubble smashed to the pavement.

London Fire Brigade said they attended the scene at around 10am on Sunday morning after reports of bricks falling from height.

They said no-one was injured when the brick wall collapsed.

A cordon was put in place. 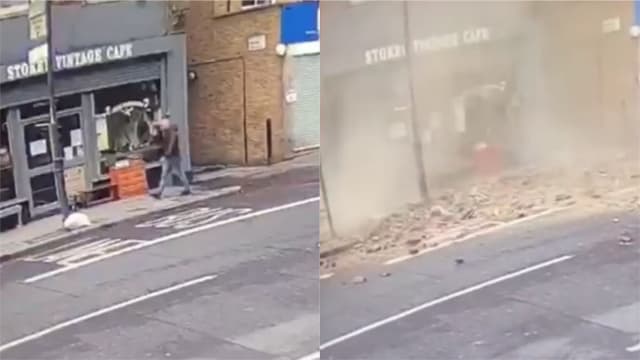 Gales of up to 65mph swept through southern parts of England on Sunday, with police forces reporting they had been called to a number of fallen trees.

The Met Office has issued two further yellow weather warnings for wind, with the wild weather expected to continue further into the week.