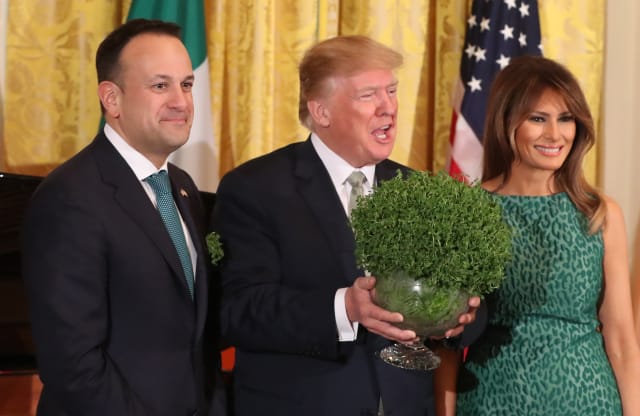 The Taoiseach will begin his St Patrick’s trip to the US this week with a series of engagements in Washington DC and Chicago.

Leo Varadkar’s first stop will be in the US capital, where he will take part in a number of events including his meeting with President Trump at the White House on Thursday.

During the packed programme he is expected to outline Ireland’s position on Brexit and recall the important role of the US in supporting peace and the Good Friday Agreement.

On Wednesday, the Taoiseach’s visit in Washington focuses on economic links, with a series of meetings to promote trade and investment between the US and Ireland.

Irish companies employ more than 100,000 American workers, while over 550 US firms with operations in Ireland employ 155,000 people.

The Taoiseach will also meet representatives of Irish companies who are expanding their operations in the US.

He will also meet the US Chamber of Commerce and IDA (investment agency) client companies, highlighting Ireland’s strengths as a location for international business and investment.

The Taoiseach will attend the annual Ireland Funds Gala Dinner and visit the exhibition Blazing a Trail: Irish Women in America.

On Thursday, Mr Varadkar will be guest of honour at a breakfast hosted by Vice President Mike Pence before his visit to the White House for a bilateral meeting with President Trump.

He will attend the annual Speaker’s Lunch on Capitol Hill and meet with senior members of Congress.

In his meetings he is to emphasise the strength of Irish-US relations.

He will also press the case for resolving the problems facing tens of thousands of Irish citizens who live in the US without legal residency.

Later that evening, the Taoiseach will join the President and Mrs Trump for the traditional Shamrock Ceremony at the White House, before attending the Ambassador’s St Patrick’s Day Reception.

On Friday, the Fine Gael leader will travel to Chicago where generations of Irish-Americans have made their home.

He will meet with a number of emigrant support groups that receive Irish Government funding and will attend a St Patrick’s Day dinner hosted by the Irish Fellowship Club of Chicago.

Mr Varadkar will end his trip on Saturday in Chicago where he will march in the St Patrick’s Day Parade, before finishing his programme by marking the launch of Tourism Ireland’s new book, Ireland’s Greening of the World, to commemorate the 10th anniversary of the Global Greening Initiative.