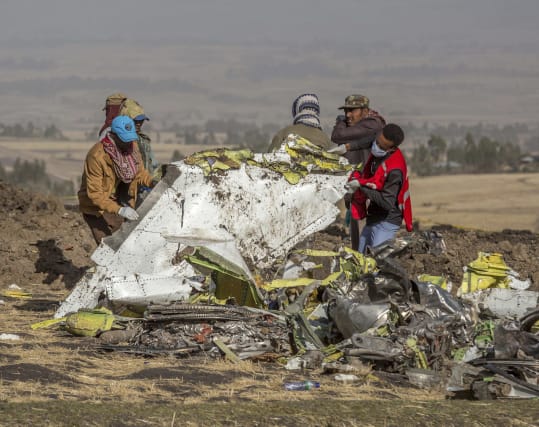 Several airlines serving UK airports are continuing to fly the aircraft model involved in a deadly crash in Ethiopia, despite it being grounded in several countries.

China, Indonesia and Ethiopia halted flights by Boeing 737 Max 8 planes following the Ethiopian Airlines crash on Sunday which killed all 157 people on board.

Tui Airways has the only five 737 Max 8 aircraft operated by a UK-based airline, and is due to begin flying a sixth later this week.

Asked if the airline would take any action in response to the crash, a spokesman for parent company Tui said: “We do not comment on any speculation and we are, as always, in close contact with the manufacturer.

“We have no indication that we can’t operate our 737 Max in a safe way like we do with all other planes in our network.”

Tomas Hesthammer, the carrier’s director of flight operations, said: “All of our Boeing 737 Max aircraft are operating as normal.”

The Ethiopian Airlines jet crashed six minutes after taking off from the capital Addis Ababa.

Both the flight data recorder and cockpit voice recorder were recovered from the wreckage.

While the cause is not yet known, the crash shared similarities with last year’s Lion Air jet plunging into the Java Sea, killing 189. That also involved a 737 Max 8 crashing minutes after take off.

The US Federal Aviation Administration, which is responsible for issuing safety certificates for the aircraft, said it was “closely monitoring developments”.

This process is validated for European Union countries by the European Aviation Safety Agency (EASA).

The UK Civil Aviation Authority said it is “liaising very closely” with EASA.

Ethiopian Airlines chief executive Tewolde Gebremariam said the pilot had sent out a distress call and was given the all-clear to return to the airport.

Senior captain Yared Getachew had a “commendable performance” having completed more than 8,000 hours in the air, the airline said.

Chicago-based Boeing is facing pressure to guarantee the safety of its 737 Max 8 aircraft.

The firm’s chief executive Dennis Muilenburg said it is providing “technical assistance” to the Ethiopian government and regulatory authorities in their investigation.

Shares in Boeing were down nearly 9% in Frankfurt and also fell 9% in pre-market trading in New York.

The Max aircraft has engines which are higher on the wing than previous models of the 737.

The passengers killed in Sunday’s crash came from 35 nations, including 32 from Kenya and 18 from Canada.

United Nations worker Joanna Toole, a 36-year-old from Devon, was among the seven Britons killed.

Colleagues at the UN fisheries and aquaculture department described Ms Toole as a “wonderful human being”, while her father said she was a “very soft and loving” woman.

Ms Toole’s father Adrian, from Exmouth, told the DevonLive website that she was “genuinely one of those people who you never hear a bad word about”.

“Everybody was very proud of her and the work she did, we’re still in a state of shock,” he added.

Joseph Waithaka, a 55-year-old who lived in Hull for a decade before moving back to his native Kenya, also died in the crash, his son said.

Ben Kuria, 30, who lives in south London, said his father regularly visited England and was returning from a trip to meet his two-month-old granddaughter and get a health check-up when he died.

Mr Kuria said: “He’s someone who really loved justice, and didn’t give up on people most people had given up on.

“He really just wanted the best for his kids. He was a father not just to us but to so many people in so many ways.”

One Irish victim was named as Michael Ryan, a married father-of-two based in Rome with the UN’s World Food Programme, which distributes rations to people in need.

Known as Mick and formerly from Lahinch in Co Clare, Mr Ryan was celebrated for “doing life-changing work in Africa” by Irish premier Leo Varadkar.

As many as 19 UN workers were feared to have been killed in the crash, the number being so high because of its environmental forum which started on Monday.