Parts of Berlin Wall to be auctioned 30 years after reunification 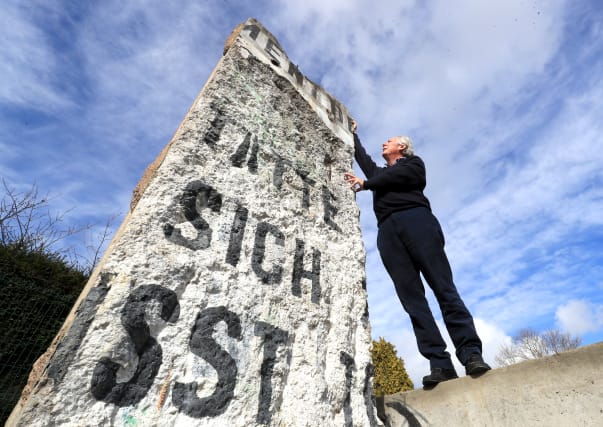 Parts of the Berlin Wall are to be auctioned as the 30th anniversary of the day it fell approaches.

Symbolising the end of the Cold War and the reunification of Germany after border controls between the east and west of the country were lifted on November 9 1989, pieces of the historic structure could fetch up to £18,000 when they go under the hammer in West Sussex next week.

The wall was built in sections, which were each 3.6 metres tall and 1.2 metres wide.

Six complete sections will be available to buy in two lots at Summers Place Auctions in Billingshurst among other items including a rare skeleton of a woolly rhinoceros.

The parts of the wall feature messages painted by the German artist and environmental activist Ben Wagin in 1990 after visitors chipped off the original graffiti, the auction house said.

Since then, the blocks have been part of a memorial garden called the Parliament of Trees, which stood in Berlin opposite the Reichstag parliament building to honour the lives of the 258 people killed at the wall trying to escape to freedom.

Some of the commemorative structure had to be removed to make room for one of the city’s new parliamentary buildings, the Marie-Elisabeth Lüders Haus, and these sections are now up for sale.

The larger lot – made up of four sections and expected to sell for between £10,000 and £12,000 – is inscribed with a quote from the then-German president Richard von Weizsacker, which is translated as: “To unite means to learn to share.”

On the other side of the stone is graffiti that reads: “Berlin November 1989.”

The smaller lot of two sections could fetch between £4,000 and £6,000 and includes a phrase translated as “Earth will become earth”.

Auctioneer James Rylands said: “This is such a historic offering.

“These parts of the wall were safely preserved since 1990 and the two complete wall sections are now available for sale and would look great in a public garden or museum, as well as in a private home.

“It is a great architectural and artistic statement but also a symbol of the triumph of freedom over tyranny.”

The wall will feature in the sale alongside the skeleton of a woolly rhinoceros, expected to attract bids of between £60,000 and £100,000.

The species was common in the Pleistocene era – dubbed the Last Ice Age around 2 million years ago.

Adult males were typically around three to four metres long, up to 2 metres tall and weighing up to 2,700kg with three horns and long thick fur.

Another rare item due to go under the hammer is a Russian Lavochkin V-751 experimental rocket.

It was built in 1960, is 10.9 metres long with a range of up to 22 miles and reaches speeds of Mach 3 while being powered by a mixture of solid and liquid fuels.

Also on sale are two identical pairs of Georgian-style wrought iron gates, which used to grace the entrance way to Easton Lodge in Great Dunmow, Essex.

Socialite Daisy Greville, Countess of Warwick, who became the mistress of King Edward VII, inherited the estate and lived there with her husband the 5th Earl of Warwick.

George Bernard Shaw, Gustav Holst, Ramsay McDonald, AA Milne and Charlie Chaplin would have passed through  the gates for social gatherings as well as HG Wells, whose family lived in one of the estate properties.

The sale takes place next Tuesday.