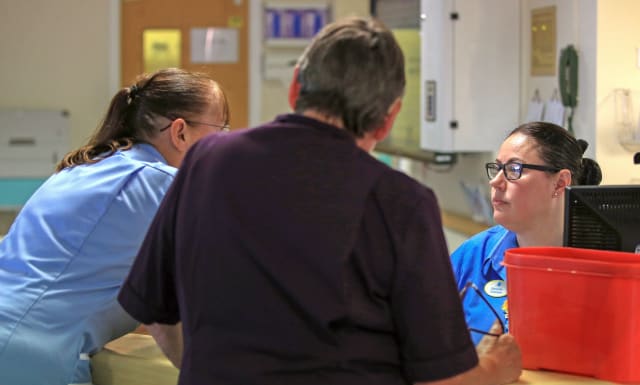 A record number of people are working for the NHS in Scotland but the number of vacancies for doctors, nurses and midwives have prompted claims of a “workforce crisis”.

The overall number of medical staff in the Scottish NHS has increased in each of the last seven years.

However, the workforces of 10 of the 22 health boards in Scotland have shrunk in the past year and the number of unfilled vacancies has seen little change.

Government figures revealed 5.1% of nursing and midwifery posts – the equivalent of 2,395.7 full-time staff – and 415.5 consultant jobs for doctors and dentists were unfilled by the end of 2018.

The number of long term vacancies – posts unfilled for three months or more – was 635.9 full-time roles in nursing and midwifery while 254.8 consultant posts were also vacant for six months or more.

There were also 513 allied health professional posts vacant, compared to 372 the previous year.

“This year, student nursing and midwifery places will increase for the seventh consecutive year, also reaching a new record high level, with the intake rising by 7.6% to more than 4,000.

“We’re developing a comprehensive integrated health and social care workforce plan to help ensure we have the right staff in the right place long into the future.

“This will be informed by our safe staffing legislation that we are currently taking through the Scottish Parliament – the first multidisciplinary workforce and workload planning legislation in the UK.”

Scottish Labour Shadow Health Secretary Health Monica Lennon said: “NHS staff regularly tell me they are exhausted and do not have enough time to give patients the care they deserve, and these figures show why.

“Thousands of vacant posts across our health services are unfilled, causing increased workloads for NHS staff around the country.

“The SNP Government has failed to properly plan the workforce needed for our modern NHS and we see this reflected in long waits for GP appointments, operations cancelled, waiting time laws broken and more patients left in pain.

“In government, Scottish Labour will make ending the NHS workforce crisis a priority by giving our health service the resources it needs and investing in our communities to end health inequalities.”

“The Scottish Government cannot continue to ask them to struggle on meeting demand without the support and resources they need.

“The SNP have spent more than a decade in charge of the health service. Staffing problems are off the chart but ministers are yet to produce a complete, credible workforce plan. Meanwhile, many doctors, nurses, dentists, therapists and radiographers are having to make do without fully staffed teams.

“The Liberal Democrats want to see the Health Secretary publish an annual report on workforce planning and lead an annual debate on it at Parliament. That way future problems can be identified and rectified before they take their toll on the health service.”