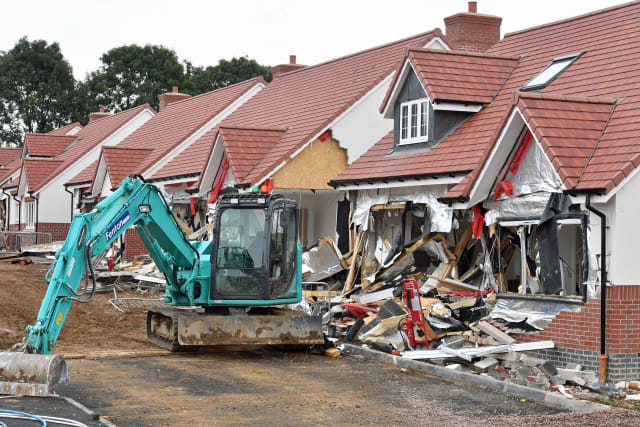 A builder who shouted “whoop whoop” as he filmed himself destroying five newly-built retirement bungalows with a digger has been jailed for four years.

Daniel Neagu, 31, had music blaring from the radio as he wrecked houses worth up to £475,000 each in Buntingford, Hertfordshire, on August 11 2018 over unpaid wages.

Dramatic footage of the roughly 40-minute rampage, which he filmed on a GoPro camera and iPhone, shows him repeatedly ram the digger into the bungalows.

He shouts “F****** shit company”, whistles the tune to Freed From Desire, and rants in Romanian during the demolition.

In one clip he tells a passer-by he is owed £16,000, adding: “I decided even if get in trouble I did it for a reason, because I didn’t get paid, you know what I mean?”

The man replies: “Go back in and smash up another one.”

As he wrecks another, Neagu says: “Beautiful houses, you have to take it down and rebuild it, that’s because you didn’t want to pay me.”

Sentencing Neagu at St Albans Crown Court on Tuesday, Judge Stephen Warner said it was a “wholesale destruction” and a “pure act of revenge”.

He said the footage was “truly shocking”, adding: “It’s quite clear from your demeanour that you were perfectly relaxed and quite unashamed.”

Neagu sat in the dock wearing a navy sweater and covered his face as the footage was played to the court.

The judge described the incident as “planned, deliberate and wanton vandalism” and said unknown onlookers who encouraged Neagu “should be ashamed of their conduct”.

Prosecuting, Richard Hutchings said Neagu was first spotted driving a digger on to the site that Saturday by a woman walking nearby with her family.

She went off but later returned at about 5.30pm and called police as she saw the wrecking spree unfolding.

Mr Hutchings said: “She saw, as she said, ‘the scoop of the digger going into a house and pulling the house down’.

“As she called the police she heard the defendant shouting to her in a calm voice ‘Have you phoned the police?'”

Police arrived at about 5.50pm and arrested Neagu.

In interview, he said his company, Danny Boy Limited, was owed money by a company called Fentons and he had been forced to pay his workers £3,000 of his own money.

Mr Hutchings said Neagu told police his own employees had threatened “to do something wrong” to his family over the unpaid money.

The cost of the destruction, in excess of £850,000, did not include rebuilding the two- and three-bedroom houses, built by McCarthy & Stone Retirement Living.

Representing Neagu, Andrew Campbell said his client, who earned about £35,000 per year, was “provoked” and called a “midget and a gypsy” by bosses whom he confronted about payment.

He added: “He had carried out these actions as a public demonstration that he had not been paid.

Judge Warner said Neagu will serve at least half of the sentence and it will be up to the Government to decide whether he can remain in Britain after release.

He said Neagu’s claim that he had not been paid “did not begin to justify your conduct that day which was unacceptable in a civilised society”.