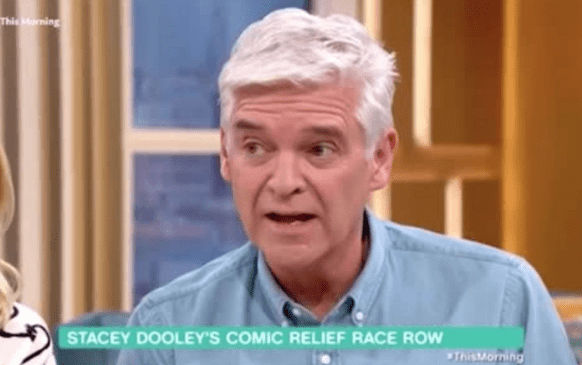 Phillip Schofield has waded into the Stacey Dooley vs. David Lammy race debate, and he appears to be firmly on the Strictly winner's side.

Debating the heated topic on This Morning,Schofield argued that Lammy's 'white saviour' claims against Stacey Dooley's efforts in Uganda for Comic Relief, were in fact racist.

"We all watch and love Comic Relief, loads of people on the telly have gone and made their videos, Stacey did that and this has been seen as unacceptable...

Schofield described the picture as "essentially very innocent" and added:

"Aren't we all trying to get to a world where we don't think about colour and it's irrelevant and 'I want to help you regardless of colour'?"

Speaking on the panel with Vanessa Feltz and Dr Ranj Singh, Feltz argued that Comic Relief should 'better think out' their charity raising efforts.

"People are affronted at the idea of a white woman with a black baby, obviously not hers.

"The atmosphere of the picture, they felt [her radio listeners] was 'here I am a white woman stepping in to save Africa'. ;I am the saviour of these people who are not able to save themselves'," she argued.

"So it's OK for Lenny Henry to go out?" Schofield asked.

"Maybe it doesn't look as jarring if it's Lenny Henry," Feltz suggested.

She went on to say that as Instagram is often used by celebrities to sell products and boast, Dooley's images cradling African children could be seen as particularly troubling.

But Dr Singh, Dooley's former fellow contestant on last year's Strictly Come Dancing, said that he felt he had to 'wade in' to this debate.

"The issue here isn't that, that is a separate thing. There are sometimes images where the white person comes in on the shining white horse to save the day – but this is not the case here.

"Stacey is a hard-working, intelligent and very compassionate individual...this was her way of using her power and privilege to do something good – and we need more of that," Singh argued.

The row between Lammy and Dooley erupted when the MP tweeted a damning criticism of Dooley's Instagram photos, arguing that the world doesn't need 'any more white saviours.'

The world does not need any more white saviours. As I've said before, this just perpetuates tired and unhelpful stereotypes. Let's instead promote voices from across the continent of Africa and have serious debate.https://t.co/LySa0BXeyi

Dooley hit back by asking why didn't he go out and volunteer himself, to which he's claimed he was asked by Comic Relief but explained on Twitter how and why he turned down the offer.

It's simply not true to say I did not respond: we had two meetings in my office. I had hoped – and still hope – your coverage would improve but Stacey's post was more of the same tried tropes. As I told you before, I'm not prepared to become part of a PR exercise. https://t.co/D5K0gI1dSz