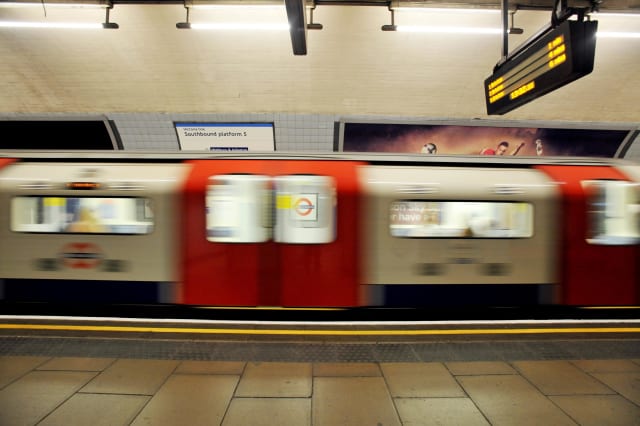 A suicide prevention programme introduced to help cut deaths on the Tube network has been credited with doubling the number of interventions by staff in a year.

Analysis by the Press Association shows there were 5.7 interventions for every suicide attempt on the London Underground network since staff were given advice in November 2017 on how and when to intervene.

This compares with 2.8 interventions in the six months before.

A subsequent round of training in August 2018 has seen the number of interventions rise to nearly 10 for every suicide attempt.

Figures also suggest a halt to the annual rise in the number of suicide attempts on the Tube since the programme was introduced.

Martin Bendrey, head of suicide prevention at Transport for London (TfL), said: “(The intervention programme) is absolutely having an impact on our organisation and how we operate as a business.

“It really is satisfying to see those results, it’s absolutely incredible.”

Data obtained by the Press Association under the Freedom of Information Act shows the number of suicide attempts on the Tube network has risen annually, from 36 in 2014/15, to 40 the following year, to 54, and then 72.

Analysis of the first eight months of the current financial year shows there were 48 attempts – an average of 5.3 per four-week period, the first time since at least 2014 the rate has not increased.

During the same periods, there were 124 and 432 staff interventions respectively, meaning the number per suicide attempt doubled from 2.8 to 5.7.

Since the introduction of a new training scheme at the end of 2018, that ratio has reached 9.9 per suicide – with 17 suicide attempts and 169 interventions in a 20-week period.

Mr Bendrey said: “This is the right time to be doing something. Mental health is being spoken about a lot more than it has been before.

“We’ve got a huge workforce out there. We are breaking the stigma, the myths, and putting some facts and figures behind it to believe in what we’re doing.

“You can’t just put one thing down to say that (the programme) increased interventions or reduced suicides, there’s a hole host of things. But we have a lot more people now knowing what intervention is.

“Suicide prevention wasn’t really known, so what we’ve done is got the training going to reinforce the importance of this.”

Tube driver Vaughan Thomas, who was involved in a fatal person-on-the-tracks incident in 2007, said attitudes have changed.

“I think a number of years back there was very little consideration for staff involved – there was just annoyance that trains were delayed,” he said.

“But now I think passengers are aware that it (an incident) affects more than just those involved.”

She said: “If you think anything is out of the ordinary, just let us know.

“Whether it’s someone just hanging around or upset – if you get a feeling, just tell us. If you do, you might save a life.”

Samaritans is available 24/7 every single day of the year, to listen and offer support to anyone who is struggling to cope. People can contact Samaritans by phone, free of charge, on: 116123, via email: jo@samaritans.org or visit www.samaritans.org to find details of their local branch.