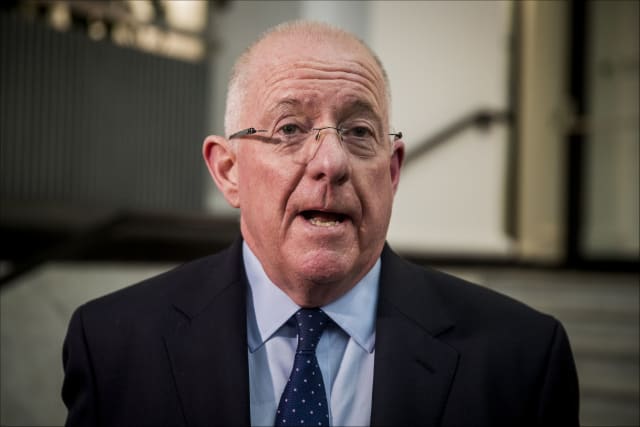 An Irish government committee has heard that there will be a number of potential legal issues following a no-deal Brexit despite contingency plans.

The committee discussed at length The Withdrawal of the United Kingdom from the European Union (Consequential Provisions) Bill 2019, which proposes legislative action Ireland could take under a range of scenarios, including a no-deal Brexit.

Irish Justice Minister Charlie Flanagan said on Wednesday: “I have to concede that in a no-deal crash scenario there will be a number of potential problems.

“The entire regime may be regarded as less than satisfactory, so we must ensure that contingency is in place, in so far as they can be.

“Ultimately, the certainty will only be evident when an agreement is reached between the EU and UK, in respect of future relationship arrangements. Obviously while the EU have been a negotiating party, there have been certain areas in terms of our relationship with the UK that we need to discuss.

“We have set forward proposals but there have been, and continue to be, instances where we have to fall back on older legislation, less modern and potentially more challenging.

“But what we’re putting forward in the Bill is urgent areas which are likely to prove immediately challenging, and as time passes we’ll continue discussions under the EU umbrella.

“Our objectives and the UK are broadly similar, ensuring protection of our people and the legal framework that existed between our countries will continue, notwithstanding withdrawal of UK from EU instruments.”

The minister told the committee that the biggest issues facing legislation post-Brexit will be immigration and extradition.

To avoid those arrested on a European Arrest warrant being released at 11pm on March 29, the government will enact an older convention measure, and then plans to further legislate for a new agreement between the two states in the future.

“The Bill provides for two amendments of the Extradition Act, to ensure effective extradition arrangements are maintained between Ireland and the UK,” the minister said.

“The optimal solution is to apply the 1957 Council of Europe Convention on extradition to which both Ireland and UK are party to extradition arrangements. While the procedure is not as effective or as efficient as an EU arrest warrant, in the event of a no-deal Brexit, it will provide a workable solution.

“The intention would then be to legislate for an extradition arrangement with the UK similar to the EU warrant.”

It was also noted that UK citizens wishing to join the Irish police force An Garda Siochana, was dependent on EU membership, and regulations will need to be amended to allow for recruitment to continue.

The minister added he hoped to have that done at an “early stage”.

Citizenship rights were also raised by a number of representatives. Mr Flanagan assured them that the common travel area will remain.

“The common travel area will continue, and that includes in a no-deal scenario, the British government and ourselves have confirmed that neither Irish citizens in the UK or British citizens in Ireland will be required to take any action to protect their status or rights.

“All of the current arrangements will continue and of course the guarantees under the Good Friday Agreement.”